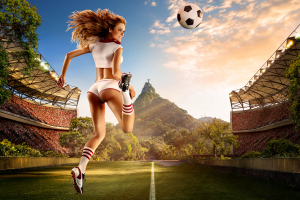 When Californian advertising photographer Tim Tadder was flown to Sao Paulo in Brazil to shoot the 2014 World Cup Calendar, you would imagine he would be spoiled for choice of superb exotic locations. But no, he decided to do all twelve shots in the studio instead!

The brief was to replicate the twelve most well-known moves from the world of soccer but using beautiful models instead of sports men or women!

Tim had already worked out that the whole thing could be stage managed much easier in the studio, where he could take hundreds of shots against the ‘green screen’.   He could control the lighting to light his beautiful subjects to perfection and freeze the action using ultra high-speed flash units.

Then, in post production, he was able to add backgrounds featuring stadiums, cities and landscapes from Brazil.

Tim Tadder’s website is testament to the fact he is a brilliant advertising and commercial photographer. Was this the best approach, or should he have utilised the natural settings?  Let me know your views in the comments

Behind the scenes with sports advertising photographer Tim Tadder during a campaign in Sao Paulo. Shooting models replicating the 12 most famous moves of soccer.

The rest of the Calendar shots (click to enlarge)…


All photographs © Tim Tadder
ELO2’s Phil Bates Ruthin gig The Cello. Not quite as boring as you thought