A Black Day for Photography

The first two are unthinkable.  The third however, is fact.  Now.  Today.  Yes the U.K. Government has passed a law that gives super-rich conglomerates the green light to steal the work of photographers – whether professional or amateur – for their own commercial gain and profit.

The U.K. Government has signalled that thousands of professional photographers are about to have their livelihoods snatched away.

And if you’re about to stop reading because you think copyright theft doesn’t affect you – think again!  Because the U.K. Government has also decreed that those embarrassing snapshots of you on holiday, or your photographs of your children, can end up on advertising hoardings around the world! 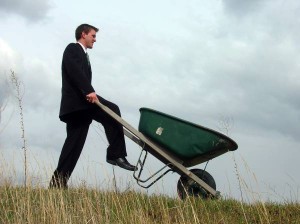 To illustrate how easy is is going to be for ruthless companies to steal a photographer’s work, I have just gone out and nicked this wheelbarrow.

A simple Google image search showed this image has been used on dozens – possibly hundreds – of websites.

The first that came up was this image posted to Twitter – probably lifted from someone elses blog who in turn had lifted it from yet another blog, Facebook page or whatever.   Yet the style of the image to me looks like a professional “stock” image.  I wonder how many of those publications he/she has been paid for?  And now the government is effectively legalising copyright theft.

So how can this be…?  I will let Andrew Orlowski of  TheRegister.co.uk  explain…

Previously, and in most of the world today, ownership of your creation is automatic, and legally considered to be an individual’s property. That’s enshrined in the Berne Convention and other international treaties, where it’s considered to be a basic human right. What this means in practice is that you can go after somebody who exploits it without your permission – even if pursuing them is cumbersome and expensive.

The UK coalition government’s new law reverses this human right. When last year Instagram attempted to do something similar, it met a furious backlash. But the Enterprise and Regulatory Reform Act has sailed through without most amateurs or semi-professionals even realising the consequences.

The Act contains changes to UK copyright law which permit the commercial exploitation of images where information identifying the owner is missing, so-called “orphan works”, by placing the work into what’s known as “extended collective licensing” schemes. Since most digital images on the internet today are orphans – the metadata is missing or has been stripped by a large organisation – millions of photographs and illustrations are swept into such schemes.

For the first time anywhere in the world, the Act will permit the widespread commercial exploitation of unidentified work – the user only needs to perform a “diligent search”. But since this is likely to come up with a blank, they can proceed with impunity. The Act states that a user of a work can act as if they are the owner of the work (which should be you) if they’re given permission to do so by the Secretary of State and are acting as a regulated body.

The Act also fails to prohibit sub-licensing, meaning that once somebody has your work, they can wholesale it. This gives the green light to a new content-scraping industry, an industry that doesn’t have to pay the originator a penny. Such is the consequence of “rebalancing copyright”, in reality.

Quite what happens next is not clear, because the Act is merely enabling legislation – the nitty gritty will come in the form of statutory instruments, to be tabled later in the year. Parliament has not voted down a statutory instrument since 1979, so the political process is probably now a formality.

In practice, you’ll have two stark choices to prevent being ripped off: remove your work from the internet entirely, or opt-out by registering it. And registration will be on a work-by-work basis.

“People can now use stuff without your permission,” explained photo rights campaigner Paul Ellis. “To stop that you have to register your work in a registry – but registering stuff is an activity that costs you time and money. So what was your property by default will only remain yours if you take active steps, and absorb the costs, if it is formally registered to you as the owner.”

And right now, Ellis says, there’s only one registry, PLUS. Photographers, including David Bailey, condemned the Coalition for rushing through the legislation before other registries – such as the Copyright Hub – could sort themselves out.

“The mass of the public will never realise they’ve been robbed,” thinks Ellis. The radical free-our-information bureaucrats at the Intellectual Property Office had already attempted to smuggle orphan works rules through via the Digital Economy Act in 2010, but were rebuffed. Thanks to a Google-friendly Conservative-led administration, they’ve now triumphed.

One is a barrage of litigation from UK creators – and overseas owners who find their work Hoovered into extended collective licensing programs. International treaties allow a country to be ostracised and punished. The threat has already been made clear from US writers and photographers, who’ve promised “a firestorm“. Reciprocal royalty arrangements can also be suspended, on the basis of “if you steal our stuff, UK, we won’t pay you”. In addition, a judicial review, based on the premise that the Act gives Minister unconstitutional power over the disposal of private property, is not out of the question.

Secondly, the disappearance of useful material from the internet is likely to accelerate – the exact opposite of what supporters wish for. We recently highlighted the case of an aerial photographer who’s moving work outside the UK, and we’ve heard of several who are taking their photos away from the web, and into lockers. The internet is poorer without a diverse creative economy – because creators need legal certainty of property rights.

And finally, there’s the macroeconomic consequences for the UK economy.

The notorious ‘Google Review’ chaired by Ian Hargreaves failed to undertake adequate impact assessments, a giveaway that even the most rabid “copyright reformers” recognise there isn’t an economic case to be made for taking everyone’s stuff and giving it away.

“There’s value in works, and if anybody can exploit them except the person who creates them, then value is transferred to the exploiter,” explains Ellis. “This is a massive value transfer out of the UK economy to US tech companies.”

Where it will remain, he thinks, because UK tech/media companies – should they appear – almost invariably become US-owned.

Copyright “reformers” of course rarely like to talk about such unpleasant matters – and will steer the conversation away from economic consequences as rapidly as possible. Indeed, the they generally talk using Orwellian euphemisms – like “liberalising” or “rebalancing” copyright. It’s rarely presented as an individual’s ability to go to market being removed. This is what “copyright reform” looks like in practice.

“It’s corporate capitalism,” says Ellis. “Ideally you want to empower individuals to trade, and keep the proceeds of their trade. The UK has just lost that.”

So while the Twitterati and intelligentsia were ranting away about “Big Content”, we’ve just lost the ability to sell our own content. In other words, you’ve just been royally fucked. ®