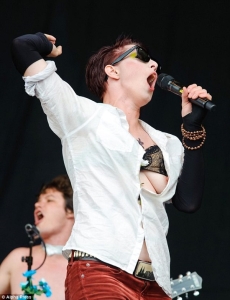 Daily Mail – Up Yours!

When the Daily Mail totally ignored rock star Amanda Palmer’s performance during her 2013 Glastonbury appearance and instead wrote an unflattering article about her wardrobe malfunction, she decided to get her revenge in a song.

They had made a point of publishing a  “nipple slip” photo, so she decided to dedicate a song to them at a gig in the Roundhouse in London in the most spectacular way.

At two minutes fifty seconds into the video she makes her point in a fitting manner!  I should warn you it becomes rather “Unsafe For Work” at that point and you might want to keep the sound down when the prudes are about too!

Here are the lyrics…

dear daily mail,
it has come to my recent attention
that me recent appearance at glastonbury festivals kindly received a mention
i was doing a number of things on that stage up to and including singing songs (like you do…)
but you chose to ignore that and instead you published a feature review of my boob

dear daily mail,
there’s a thing called a search engine: use it!
if you’d googled my tits in advance you’d have found that your photos are hardly exclusive
in addition you state that my breast had escaped from my bra like a thief on the run
you do you know that it wasn’t attempting to just take in the RARE british sun?

dear daily mail,
it’s so sad what you tabloids are doing
your focus on debasing women’s appearances ruins our species of humans
but a rag is a rag and far be it from me to go censoring anyone OH NO
it appears that my entire body is currently trying to escape this kimono….

dear daily mail,
you will never write about this night
i know that because i’ve addressed you directly i’ve made myself no fun to fight
but thanks to the internet people all over the world can enjoy this discourse
and commune with a roomful of people in london who aren’t drinking kool-aid like yours

i keenly anticipate your highly literate coverage of upcoming tours

dear daily mail,
UP YOURS.