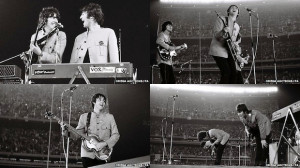 In the news today we hear about an amateur photographer who has just sold a set of photographs of the Beatles for over £30,000.

Marc Weinstein used a fake press pass to photograph the band during their biggest ever concert at Shea Stadium back in 1965.  There was only one other photographer present at the concert and he ran out of film half way through, leaving Marc with a unique set of exclusive shots that were snapped up at auction  yesterday by an American collector.

This reminds me of a story told to us by one of the lecturers when I was a photography student at the Laird School of Art in Birkenhead in 1976.  Herbie had formerly run a small studio in Liverpool doing weddings and portraits.  During the sixties many of the emerging bands would come to him to have publicity photographs done.

He recalled one particular band who kept calling back in every couple of weeks to order “another half a dozen” postcard sized prints because they couldn’t afford to buy a large quantity all in one go.  He found it was a bit of a pain having to keep prints these small quantities – especially because the band had appealed to his good nature and negotiated a cheap rate.  So one day he said “Tell you what lads, here are the negatives, just take them along to the chemists whenever you want more prints making”.

That band went on to become famous and Herbie often rues the day he gave away the negatives of the first ever official photographs of the Beatles!