I have to say, I’ve had a good life thus far.  I really am eternally grateful and I’m sure I’ll have a million tales to tell when I eventually pull up a cloud to sit and reminisce on the other side of them pearly gates. 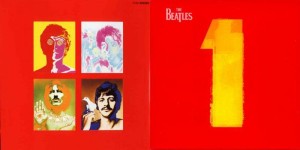 One such tale would undoubtedly be that I lived through the rise and fall and resurrection of the Beatles.

And in fact I did so at the very time when such things were of prime importance.  Being in the same age group as Messers McCartney, Lennon, Harrison and Starr (well, just a touch younger!), I was thumping a bass guitar in the Executioners line-up just as he and his band were beginning to take Merseyside – and then The World – by storm.

My teenage band cut our musical teeth emulating the instrumental sounds of  Hank Marvin, Bruce Welch and Jet Harris. But very soon after first hearing John, Paul, George and Ringo twisting and shouting, we kicked the instrumentals-only gig list into the shadows and began to “beatlise” every song we covered.

Earlier I said “the rise and fall and resurrection of the Beatles”  They lasted longer than (and of course were far more successful than) The Executioners, but when they split up it was far more devastating to me personally.  John’s murder hit me almost as hard as would a family bereavement and George’s passing sadly put paid to any remote chance of a Beatles reunion.

So what do I mean by resurrection?

Well just think about it.  The first Beatles single Love me Do was pressed in good old fashioned vinyl in 1962 as were their huge catalogue of releases in the ensuing eight years up to the break-up following Let it Be.  Since then we have seen many reincarnations and remasters put out on CD and other forms for digital media.

The most significant  aspect of the “resurrection” of the Beatles was their appearance on iTunes.  Whether you like iTunes or loath it (I’m the latter, by the way) this new way of selling music has opened up a whole back-catalogue of music to be rediscovered by post Beatles generations. 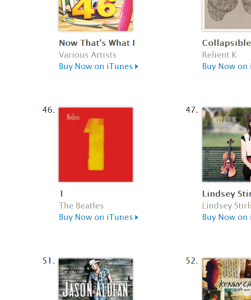 As of today, Beatles 1 is at number 46 in the iTunes Album Charts.  Forget all the figures being bandied about regarding their record sales during their heyday.  Disregard the fact they have had more number-one albums on the British charts and sold more singles in the UK than any other act in history.  What we are taking about is a generation who embraced punk and rap and what ever else, are buying (downloading) Beatles tracks and albums. 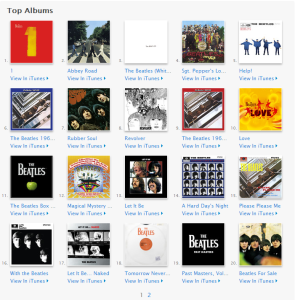 Of the 37 Beatles album currently available on iTunes, Beatles 1 is the most popular.  Released on 13 November 2000. The album features virtually every number-one single they released in the United Kingdom and United States from 1962 to 1970. Issued on the 30th anniversary of the band’s break-up, it was first available on CD and topped the charts worldwide, selling over 31 million copies.

It is now 43 years since the Beatles disbanded.  For their music still to be selling in such numbers is a phenomenal achievement.

Here is the Track listing for Beatles 1

Neb-Senu – a moving experience Bouncing around the theatres