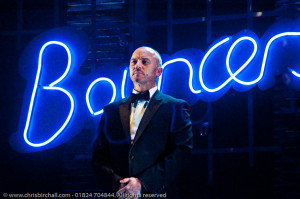 Okay… So it may well have been sexist, laddish, and the humour lavatorial, but the ladies in the audience loved it just as much as the men.

But then again no-one goes to the Royal Court for a high-brow evening of culture do they?  They go knowing full well they are in for an evening of the most fabulous fun.  Good, down-to-earth, honest to goodness scouse humour. And that is exactly what the audience got last night when the four bouncers in their white shirts and dicky-bows, having mingled with the theatre-goers prior to curtain-up, bounced up onto the stage to take us through a night in the life of the club doorman.

I must admit, when I first read the synopsis I did wonder how four blokes on a sparse stage were going to manage to hold the audience for the full two and a half hours.  My worries were unfounded. These four talented guys not only held the audience, they totally owned them.  So much so they earned a passionate standing ovation from the house – and this was on Press Night, one of the toughest audiences to please!

It was so well deserved too.  For without any change of costume or scenery they played over twenty different characters. In addition to the four bouncers, they took us through sketch after sketch, using nothing but their acting skills to transform, one minute into dippy salon girls getting ready for a night out, and the next into drunks attempting to gate-crash the club, and then on to depict smooth operators on the dance floor, the slick-talking Disk Jockey, desperate end-of-the-night wallflowers hoping to pull a bloke, equally desperate blokes hoping to pull a half decent bird.  They went effortlessly from camp to butch and back again, from scouser to cockney from chav to punk, and from sober to drunk to comatose.

Writer John Godber constructed the play around real city night-life antics back in the mid eighties, and now director Bob Eaton has brought it up to date and regionalised it brilliantly to give the Royal Court audience exactly what they wanted. 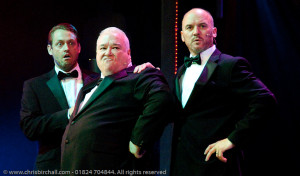 In one of the final scenes, set in the gents toilets, we witness four very inebriated blokes making their way to the urinals across the slippy flooded floor.  It was one of the funniest things I have ever seen – made even funnier, of course, by the fact it is something we have all seen or even done ourselves at some stage in real life!

The play was fast-moving, going from one cameo sketch to another without any let-up in the quick-fire comedy. 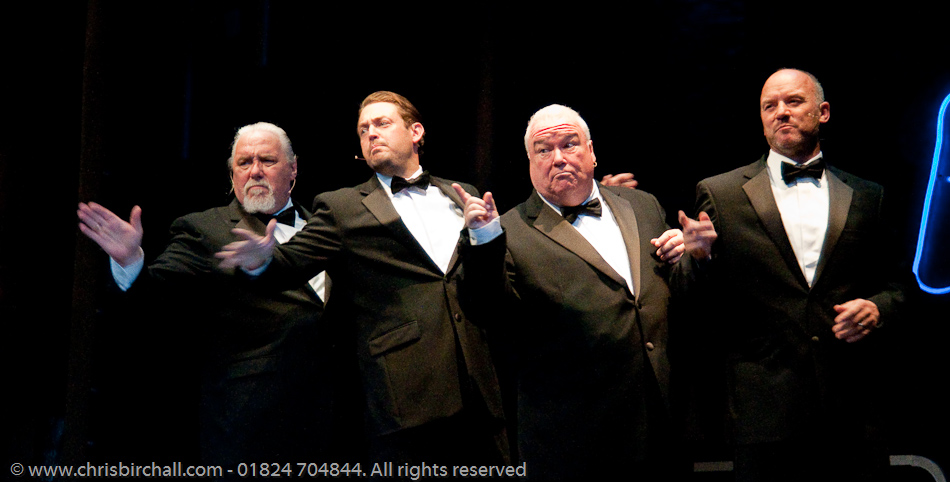 Of course, for a play like this to work, you need to have the right actors. Paul Broughton, Danny O’Brien, Michael Stark and Mark Womack are no strangers to the Liverpool stage.  They know how to grab the Royal Court audience by the throat and not let go until they’ve squeezed out every ounce of laughter.

There was no “man of the match” for they each brought something special to the stage.  It is heartening to see such experienced and talented actors returning again and again to this unique theatre.  Especially when you consider that between them, their stage, screen and television credits practically filled a double A4 spread in the cast biographies section of the program.  Credits that include Corrie, Brookside and The Royal as well as hard-hitting dramas like Good Cop, Liverpool One and Murphy’s Law.

Bouncers is on at the Royal Court Theatre in Liverpool until 17th of August.  This is five star entertainment. You really don’t want to miss it!