Bouncing into the Present Day 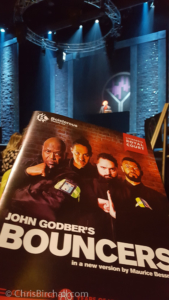 When John Godber wrote Bouncers back in the eighties he created a script about real-life city night-club antics that would spend the next thirty years being adapted and tailored to the locale in which it was being performed.

It was a tried and tested recipe and each time it has been served up at The Royal Court, just the right amount of scouse sauce and seasoning has been added to satisfy the taste of this lovely theatre’s discerning audience.

This year’s production however, has been rewritten by Maurice Bessman and brought bang up to date by the brand new Boisterous Theatre Company.

Gone are the black suits and dickie-bows, replaced instead by the contemporary black shirts and hi-viz security ID badge holder armbands, instantly recognisable as the uniform of the modern day club/pub doorman. 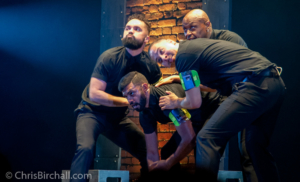 The play revolves around four burly blokes on the door at a city centre night club, played by Mutty Burman, Joe Spear, Michael Horsley and Zain Salim, all newcomers to the Royal Court’s main stage.

In addition to playing the hard-nosed security crew, they switch variously, hilariously and believably, to portraying rowdy drunks, likely lads on the pull, posh oiks slumming it with the peasants, giggling scouse girls on a hen night, and a whole host of diverse characters they come across during the course of a night. 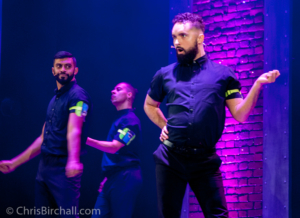 The way they switch in an instant from hard-knocks to archetype female hairdressers is so believable, you totally forget the fact they are still wearing the bouncers garb. They went effortlessly from camp to butch and back again, from scouser to cockney from chav to punk, and from sober to drunk …to comatose.

These four talented actors proved they also knew how to bust a move, with long episodes of high energy dancing throughout the show.

Bouncers runs at Liverpool’s Royal Court until September 15th. This is five star entertainment. You really don’t want to miss it!

Mam I’m ‘Ere. Yes… over ‘ere, at the Royal Court Maggie May – Review