Brick Up The Mersey Tunnels 2016 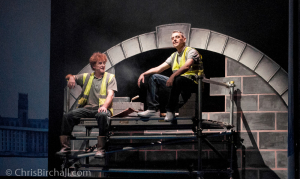 I had this horrible nightmare:

Happily, the subterranean routes into Liverpool are clear, allowing theatre goers from the Wirral, Wales and beyond ample opportunity to see this hilarious play.

Written over a decade ago by Dave Kirby and Nicky Allt, “Brick Up” has been heralded as the play that kick-started the Royal Court’s return to glory. It keeps coming back and it keeps putting bums on seats, and has been seen by over two hundred thousand people since it’s Royal Court début in 2006. 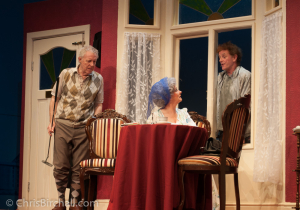 The play explores, and exaggerates, the cultural differences between “The Wirral Set”, personified by Anne Twacky and her long suffering husband Dennis, and the Grafton going grafters from scouseland proper, such as Dicky Lewis.

It is more than the posh Mrs Twacky can bear to engage a coarse scouser to build her conservatory – but needs must and he has after all, built extensions for just about any famous name you care to drop. And Dicky does, at every opportunity!

The plot is simple. Just read the title. But the events leading up to that final deed are laced with some of the finest comedy cameos that have ever been written. 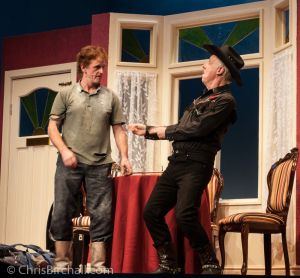 The cast are magnificent and it is no coincidence that, bar one, they are made up of the same actors who appeared in the very first showing a decade ago.  They got it right then – and they have stuck with it.

Eithne Browne and Roy Brandon play the posh Twackies to perfection, and you couldn’t ask for a more typical scouse scally than the former Scully, Andrew Schofield.

Schofield is so loved by the Royal Court audiences, a cheer goes up the minute he first appears on stage. 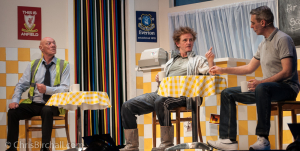 Carl Chase plays the part of Nick Walton, architect of the plot to block the tunnels, with Gerard Gardner (played by Paul Duckworth) completing the dream team that would go down in history as The Kingsway Three! 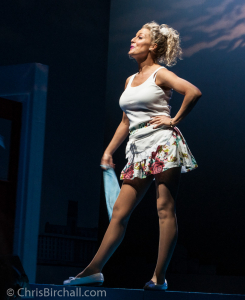 Much of the planning is done in a greasy spoon café run by the delectable Maggie (played by the delectable Suzanne Collins) who spends much of her time fending off the advances of her customers before falling for the dapper shrimp salesman Elliot Neston (played by shrimp-sized Adam Keast).

These actors just bounce off each other. The on-stage chemistry is magic and you can tell that they are so at ease with their parts, they can’t help taking every opportunity to wind each other up, making for some wonderful ad-lib humour. This is particularly evident in the scenes where the three “Wirral Ladies That Lunch” get together. 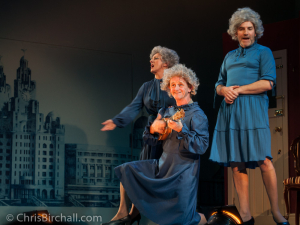 Andrew Schofield in a wig and dress is a sight to behold as he plays the part of Dee Estuary alongside Francis Tucker whose portrayal of the randy Liz Card was slapstick heaven.

The one member of the original cast who was unavailable for this run, Davey Edge, was in the audience on press night, and it was a lovely touch that he got an honorary mention from the stage during the curtain call.

Everything about this show, under the extremely skilled direction of Bob Eaton, is just wonderful.  The live music, both from the pit and frequently on stage too, is testament to the talents of Musical Director Howard Gray and his team.

It is a play I have seen several times over the past ten years and is one I would not hesitate to see again.

To give it any less than a 5-Star rating would be a travesty.

Brick Up The Mersey Tunnels runs until 5th March.  Tickets start at just £13 and stall tickets can be purchased with a meal for an extra tenner!

Those Desperate Scousewives – Pulling a Christmas Cracker Again! Merry Hell at the Altar with a very Grateful Fred