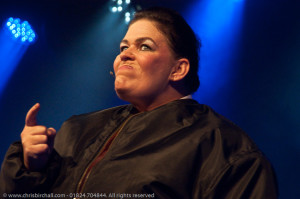 When people ask about photographing stage shows, gigs and the like, I always advise switching off the flash, taking the camera off auto, and expose for the faces.

Now, it seems, I will have to add: “wear a pair of ear plugs when Lynne Fitzgerald is on stage”.

This lady was so funny last night, I was laughing uncontrollably and genuinely had difficulty keeping the camera steady! Looking behind me I could see just about everybody in the audience at the Floral Pavillion, New Brighton, constantly wiping the tears from their cheeks.  The lady beside me even kept asking me if her mascara had run. Oh hang on… that was no lady, that was my wife!

Note to self: Leave the jokes to the professionals!

Seriously.  This was funny.  Seriously funny!

In the past I’ve found that one-woman shows can, if I’m honest, be a bit hit and miss.

This however, was a huge hit.

Set in a Liverpool night club, Bunty the Bouncer was written over twenty years ago by Marc Gee and as well as the title role, Lynne played nine other characters including scouse tarts, the dippy bride on a hen night, Jack the lad out on the pull, the gate crasher, a Greek kebab shop assistant, a drug pusher, a drag artist, the toff and the down-and-out.

She transformed into each persona effortlessly.  Her only tools being the addition of minimal props, a complete change of voice or accent and a magical gurn of that amazingly rubber face.

When she opened the second half of the show as the drunken transvestite drag act, Shona Snatch, she delivered a ten minute club-style comedy routine that made anything the Edinburgh Festival might have to offer, seem like a Sunday School sermon by comparison.

Whilst relating the story of one night on the door of a club and the characters who pass through it, there was never a break of more than a few seconds in the quick-fire gags, one-liners and and sit-com cameos.  The only part of this show that was not funny was the last sixty seconds.  Let’s face it, there was nothing funny about Bunty the Bouncer catching a bullet meant for a drug pusher who had overstepped his territory!

Lynne acted out that part too, with the drama and poignancy it deserved. And when the lights came back on, every member of the audience was on their feet to proffer the most enthusiastic ovation I have heard in a long time.

I’ve said it before and I’ll say it again, this girl’s talents deserve much wider recognition. I reckon the only reason she is not on our TV screens is that they are afraid she would put so many other comedy actors to shame.