Sitting in Liverpool’s Magnificent St George’s Hall last night was very much like sitting in my own living room.

Well… When I say “very much like” what I mean is “…like – but a thousand times better“.  I’m not for one moment suggesting my living room in any way resembles St Georges Hall in stature, grandeur or size. But if I tell you that during the six weeks or so since we bought Gary Edward Jones’ album The Cabinet Maker, my living room as resounded pretty much non-stop to the absolutely lovely songs on this CD. 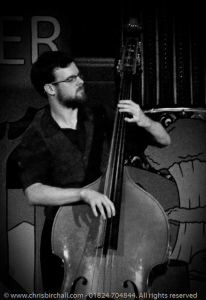 Listening to them in St George’s Hall was different of course.  For a start the seats were not as comfy as mine [facetiousness alert! 😉 ]. Not that it  mattered, because I was on the edge of my seat all evening, soaking in every word, every note, every harmony of the sounds emanating from that magnificent stage.

I was revisiting the stories I’d already discovered behind the beautifully crafted lyrics and searching out more of the hidden meanings that talented songwriters such as Gary weave into their songs, like little secrets hidden away in rooms with doors ajar just a chink, as if to tease and leave you wanting to know more.

They were bound to play all the songs on the album of course, so I knew I would hear my personal favourite, Free Falling.

Gary wrote this song a few years ago in honour of a mate who had sadly lost his father to suicide during a bout of mental illness. That poor man’s favourite song had been Free Falling by Tom Petty and Jeff Lynne. Gary’s song, bearing the same title, closes with the words “I sing free falling to the end”.   Every time I hear it brings a lump to my throat and a tear to the corner of my eye. 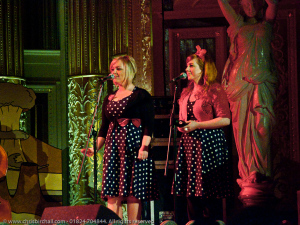 Last night the tears were free flowing. Gary choked up introducing the song, so his partner and backing singer Elizabeth Kearney took over. Despite the emotion, Gary sang this beautiful song beautifully and faultlessly.  When he finished, he announced that it was the first time he’d ever sung it live in front of the mate to whom it was dedicated.  When that mate rushed up to the stage, hugged Gary and thanked him, there wasn’t a dry eye in the whole auditorium.

In terms of a live concert, I think I can honestly say I have never been to one that was better.  Not just in terms of the songs themselves, but for the sheer quality of musicianship and visual performance too.  Gary with his powerful yet unassuming presence, Skeet with his entertaining “guitar faces” during meticulously executed riffs, and Oscar whose relationship with the double bass is much like that of a ballroom dancer on the dancefloor. 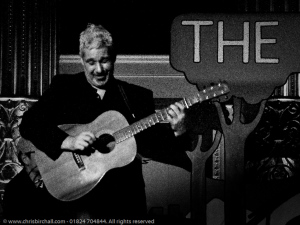 have heard Gary Edward Jones perform on three occasions  over the past twelve months, as a three piece comprising himself, master guitarist Skeet Williams and brilliant bass player Oscar South. Each and every time I have been knocked out by the sheer quality of their combined sound.  Everything balanced to produce an overall tight unified sound, whilst at the same time being able to hear every word in the vocal right down to the emotion and inherent tremors; every note in Skeet’s delicately picked yet intricate guitar licks; and every rich, powerful, yet subtle note from Oscars double bass.

Last night the magnitude of the task was doubled, with the addition of electric piano, drums, banjo and of course two backing singers. Getting the right mix is hard enough in the studio, when levels can be adjusted after the event. With up to eight people playing live on stage it can become a nightmare but Gary’s sound engineers accomplished it like a dream.

The sound in the acoustically perfect St George’s Hall did The Cabinet Maker full justice.

Let’s not forget the two warm-up acts Johnny Sands and Rob Vincent who put on a fabulous show in the first half, preparing the audience for the main event.