“Good scouse comedy has become the Hallmark of a successful Royal Court production.  And this fast moving, laugh a minute, door-slamming, trouser-dropping, breast-baring farce is no exception.” 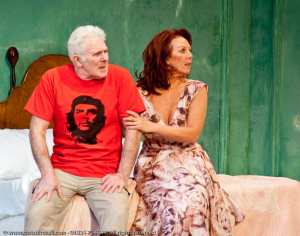 The legendary TV sitcom character Reggie Perrin did it back in the seventies, as did the real-life disgraced MP John Stonehouse.

In fact “Doing a Reggie Perrin” entered the vernacular as a euphemism for faking one’s own death to claim on the life insurance. 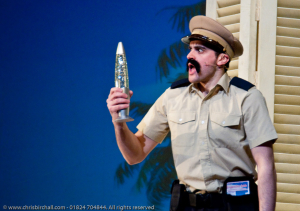 Perrin and Stonehouse’s method involved leaving their clothes on the beach with a trail of footprints to give the impression they had gone for a swim and never came back. Whereas writer Mike Yeaman’s character Frank (played by John McArdle) paddles a canoe out of Crosby Marina before going into hiding, the discovery of his empty canoe implying he had drowned. 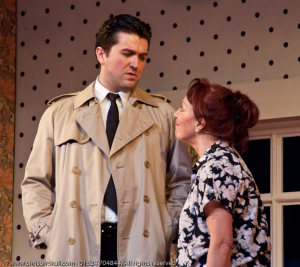 Only his wife Beryl (played by former Brookside, Emmerdale and Coronation Street actress Pauline Fleming) was in on the secret. And keeping that secret from their son and daughter, the police and the insurance company, is what provided the cast, under direction from Cal McCrystal, with the perfect material for this laugh-a-minute comedy. 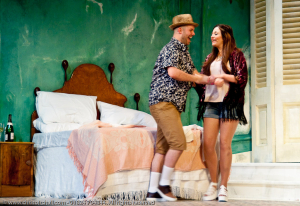 Carol and Keith, the couple’s grieving children played by Angela Simms and Michael Ledwich, almost discover the secret that Frank is hiding back at the house whilst policeman Watts (Stephen Fletcher) is convinced that a scam is taking place. All of this makes for classic farce, with all the opening and closing of doors and rapid one-liners that the fun-loving Royal Court audiences relish. 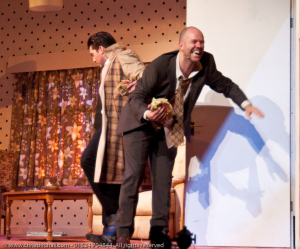 The drunk scene by Stephen Fletcher and Michael Ledwich as Watts and Keith roll in from a “night on the lash” was one of the funniest I’ve ever seen.

Another memorable moment is when Inspector Watts appears wearing nothing but Carol’s short and gaping dressing gown. Beryl just doesn’t know where to look… but then manages to reach for her glasses to craftily inspect the inspector! 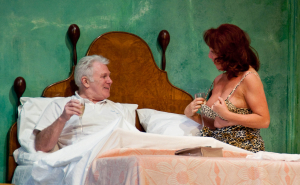 Act two sees the action move to Havana as the insurance-swindling couple escape to the sun. At first it seems their only worry is the consistency of Beryl’s all-over tan. Then they encounter Mendoza, the curious Cuban cop hilariously portrayed by Harry Katsari.

And, of course, the inevitable happens when Keith and Carol turn up with Inspector Watts in tow.  None of them yet know that Frank is not dead so, with the addition of Benny (Jack Taylor-Wood), a tropical storm and a couple of “supposedly hidden” stage hands, the door/window hopping continues in well-rehearsed hilarious chaos. 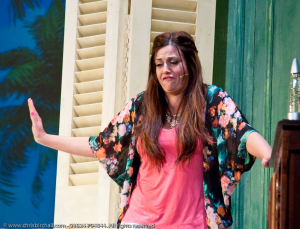 At one point, Angels Simms almost brought the house down with a moment of brilliant ad-libbing. She dropped the mobile phone she was using down a gap at the side of the stage and had to plea – nay, demand – that a front-row member of the audience lend her theirs so her character could continue with the scripted phone call! 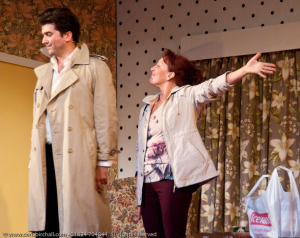 The plot is simple and predictable but cleverly woven into a fabulously funny script. Writer Mike Yeaman and director Cal McCrystal made several last minute changes to “scouse up” the comedy, changes that inadvertently created the need for an additional actor.  It was Stephen Fletcher who stepped into the role at the eleventh hour.

Good scouse comedy has become the Hallmark of a successful Royal Court production. And this fast moving, laugh a minute, door-slamming, trouser-dropping, breast-baring farce is no exception.

Canoeing for Beginners runs at The Royal Court, Liverpool until 28th of February.  It’s very very funny so do get along to see it. And do yourself a favour… book a seat in the stalls. The seating is set out cabaret style and you can enjoy a meal before the show for an extra tenner!