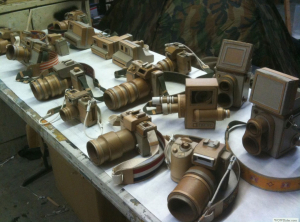 Several years ago I used to do camera reviews for Camera User, SLR Magazine, Photo News Weekly and other publications.

I remember decrying the fact plastics were beginning to be utilised in the construction of cameras.  I was, at that time, a devout Nikon F user – the big iron battleship that it was.  But then, Gandolfi was probably just as peeved when they stopped using wood in the mainstream manufacture of cameras!

Things progressed, of course, for better or for worse. Recently I was interested to see things had come full circle with Elvis Halilović’s remarkable range of fully-working film cameras made from wood.

So I gave more than a second glance when I spotted this fabulous collection of cameras made from cardboard.

American artist and sculptor Kiel Johnson has crafted a range of cameras and the collection includes SLRs, Polaroids, point and shoot cameras, twin lens cameras and the retro 8mm cameras.  These are just works of art though, they don’t actually work.  They are lovely caricatures, rather than replicas and would look absolutely fabulous as display pieces in a photographer’s home.

I want one – although I suspect I would have to save up for a very long time to own one.