September 2012 update:
Click here for an additional review of the extended version of Catfish Therapy

Blood, Sweat, Tears …and a Toenail! 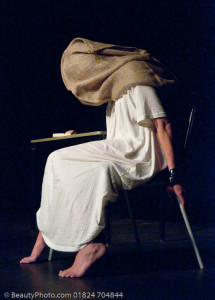 When a play is entitled Catfish Therapy and features Lynne Fitzgerald and Suzanne Collins, let’s be honest, I naturally anticipated settling down to a good light-hearted comedy of the sort this pair of Liverpool actresses are renowned.

I couldn’t have been more mistaken.

It would be wrong however, to say I was disappointed because disappointed I most certainly was not.  Within seconds of the lights going down we were gripped by one of the most intense psychological dramas I have seen in many a year.

It was the first ever performance of this hour-long gem from the pen of Ian Moore.  Ian also directed the play which was part of the Liverpool “Write Now” one-act play festival that runs at the Actor’s Studio in Seel Street from 30th March until 7th April 2012.

How good it was to see these two actresses performing outside their comfort zone – and boy, they did-so brilliantly!

Suzanne graduated from her stint on Brookside Close to appear in countless scouse comedies such as “Brick up the Mersey Tunnels” and “Fifteen Minutes that Shook the World”.

Lynne made a name for herself on the club comedy circuit before treading the boards in the likes of “The Salon” and “Desperate Scousewives” (the stage play that she co wrote with Clare Bowles). 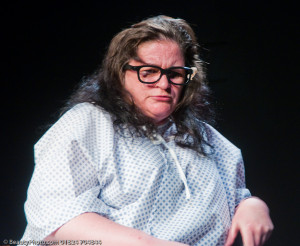 Last year, Lynne appeared in Ian Cartwright’s “Two” where alongside Louis Emerick they played between them no fewer than fourteen different characters. In Catfish Therapy, however, she and Suzanne each played the respective split personalities of what we assumed were two schizophrenics.  I say “assumed” because the final moments of the play revealed a very clever twist!

They both delivered performances that elevated their acting careers to a whole new level.  They did so with compassion and conviction.  The scenes of violence were exceptionally convincing.  None of your “slapping the thigh whilst feigning a blow to the face”. This stuff was good!

They really threw themselves into it – quite literally at times!   In fact it was so good, and so realistic, that during one such scene Suzanne actually lost a toenail!  She showed us after the show where she had bitten into her own hand to counter the pain from her toe.  It’s no wonder the tears we saw on stage looked so real!

This play had the entire audience sitting on the edge of their seats for the entire sixty minutes.  Do catch it if you can.