Our Cheeky Calendar raises over £2,500 for Charity 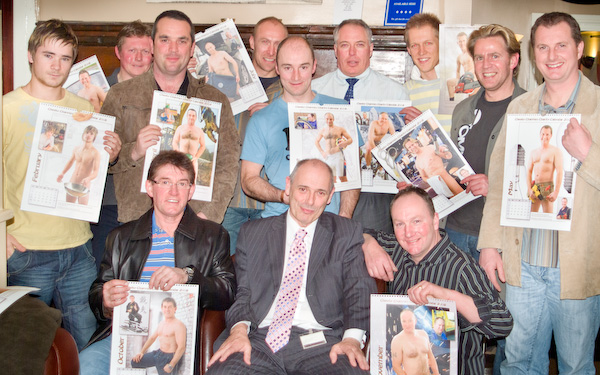 The cash was handed over during a get-together at the Wynnstay Arms, where we all enjoyed an excellent buffet (courtesy of Autoproducts), everybody kept their clothes on and we even managed to sell more copies of the calender to some of the other diners!

The lads who bared all to pose for the calendar come from all walks of life – from mechanic to electrician; chef to hairdresser; company director to shopkeeper.  Never having done anything like this before, they were all “talked into” the idea by Roger Everett (Mr July) of Autoproducts.

And were they hesitant?   Did they just “grin and bare it”?   Not at all.  They were all enthusiastic – really good sports.

I think it’s true to say we were all delighted at the amount raised. We’re very grateful to everyone who participated and gave their time and talent free of charge.  The shops that sold it, Jayne and Chris who did the photography and artwork, Roger and Fiona who did the marketing, and the printers Modern Press.  It meant every penny raised went to the charity”

Copies of the calendar are available whilst stocks last, from the reception at Ysbyty Glan Clwyd and via the Cheeky Chappies website www.cheeky.beautyphoto.co.uk