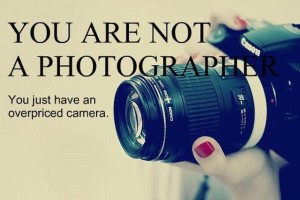 Okay.  Now I’ve got your attention, let me clarify…

I’m not offering cheap photography, neither am I advocating it.  I’m here to censure and condemn it and the people who advertise it.

I’ve spoken before about the upstarts who buy a “professional looking” entry level SLR and wave it around at weddings shooting hundreds of ill-conceived, unposed, badly framed pictures that they then burn to disk and hand to the bride for a couple of hundred quid.

These people often pass themselves off as professional photographers, even though they work at something else Monday to Friday.  They think it’s great that they can recover the cost of their new toy after shooting a handful of weddings.  What they don’t realise is the disservice they are doing to the bride and groom, depriving them of real good quality imagery, and the disservice to the industry as a whole by cheapening it.

Something that is cheap but useless, is actually rather expensive!

Worse are the shamateurs who, spurred on by the positive comments of friends and family really start to believe that their images are good and set themselves up as full time professionals. But the worst offenders of all are those who actually turn out quite reasonable imagery and sell themselves short, mistakenly thinking they need to compete with and match the prices of the shamateurs.

You might this this is sour grapes.  You might think I’m against fair competition.  Why shouldn’t a new photographer be competitive and give the established pros a run for their money?

I’ll tell you why – they are ruining the industry.

They are giving the photography buying public the impression that good, creative professional photography is cheap.  It is not.  And those photographers charging peanuts may well be here today but they will definitely be gone tomorrow! 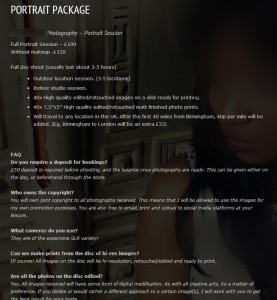 For instance there is a guy in Birmingham who’s just turned up on Facebook showing some pretty impressive images.  He is one of many. There is a link to his website.  A slick professional looking website.  And wow! You’d be a fool not to book him wouldn’t you?.  His prices are very very reasonable for such good quality work!

Lets break that down:
First take out his travel expenditure. He’ll do a round trip of up to 80 miles without charging you. With an average cost of 40 pence per mile, based on the latest Automobile Association figures, that’s going to cost him up to £32.

Then there are the 40 prints and the cost of the disk.  If the term “High Quality” means he’s using professional photo paper and inks (not cheap compatibles) 7×5 prints are going to cost him 50 pence each to produce (disregarding the capital expense and depreciation of a professional photo printer).  So another £20.

So you might think that’s not too bad for a days work. After all five days a week that’s £490 times 52 weeks or the year, that’s twenty five grand a year; just short of the national average and about what a recently qualified teacher would earn.

Wrong! For a start, a teacher (or any other employee) gets his pay packet every week (or month) but doesn’t work every week of the year.  They get at least six weeks paid holiday (teachers considerably more), whereas a self employed photographer only gets paid when he works.

But even the day to day figures don’t add up.  This guy is offering forty edited/retouched images.  When you take into account the uploading, sorting, indexing, backing-up and even the most basic edit/retouch done properly, you are talking of around ten minutes per finished image, so the day after the shoot he’s got 400 minutes (six and a half hours) of post processing.  The rest of his eight-hour day will be taken up with making/trimming/packing the prints, posting them out, making coffee, feeding the cat and phoning the next day’s client.

So realistically he’s only going to be putting £98 in his pocket every two days.  Let’s say he’s lucky and gets three of these bookings a week and is prepared to work up to six days. Out of the £294 in his pocket he’s going to have to set aside £38 to give himself a £294 wage during the six weeks holidays when there’s no money coming in.  He’s clearly not going to be earning enough to pay income tax but National Insurance is three quid. Call it a fiver a week to cover the aforementioned coffee and cat food.  Then there is his business insurance, public liability etc, say another tenner a week. Heat and light another tenner.  His £294 is now down to £241.  Even if he was working flat out six days a week and even if none of his equipment broke down or needed replacing, and even if there were no other unforeseen business expenses, He’s be working for less than the national minimum wage.

So realistically this guy won’t be around in twelve months time, which is a shame because he is creative and his work is rather good. Sadly though, the damage has already been done.  Because another upstart will be ready to pose as a “professional” photographer and use this guy’s pricing model as a yardstick.

Worse still, the photography buying public are being conditioned into thinking that £150 a day (which we know really means two days) is in fact the going rate!

So please… If you are someone just starting out in professional photography, don’t base your price list upon what is being charged by others.  Set yourself a target wage and then treble it.  Yes treble it.  That will bring you close to the true turnover you will need to cover the overheads that are a fact of life when running a one-man business.  After your first year in business you will likely need to increase the figure to take into account your particular circumstances but at least you will not go under after the first year.

And if you are someone looking for a photographer, remember: If something is cheap but useless or poor in quality, is actually works out rather expensive!

Bouncing around the theatres Bouncers at the Royal Court – 2013