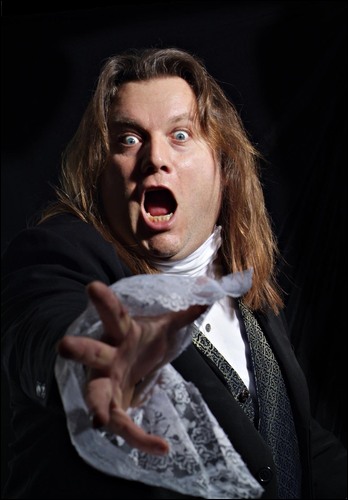 …but Hell, you wouldn’t know! – He’s got the hair, the belly, the look and charisma.

As we drove down to the venue, Jayne remarked “This Hollis guy’s going to have to be good to sound like the real thing”!

She needn’t have worried. Sure, Hollis was a Dead Ringer for Michael Lee Aday (Meat Loaf to you and me) – but most of all he’s got the voice too.

This wasn’t just another tribute band.  This was the Meat Loaf Rock Opera, and as the story unfolded, Hollis, his singers and his band delivered a superb performance from start to finish.

Close your eyes and it WAS  Meat Loaf.  Open them again and you still found it hard to believe that this wasn’t the man himself, delivering song after powerful song from the stage at Rhyl’s Pavilion theatre.

I honestly couldn’t fault it.  The band were brilliant – and kudos to their new bassist who delivered a flawless base line throughout despite this being only his third appearance with the band.  He was really living the dream and he did it effortlessly.  I’ll wager not many of the audience even picked up on the fact he was having to keep one eye on the sheet music as he gave it his all.

Sound quality – so often left wanting at this type of event – was spot on.  The two sound engineers did a great job.

The four girl singers – all from Cornwall – were not just decoration and backing vocals.  Each of them performed solo numbers which proved what talented singers they were.  One of the newest, who played the dippy character Daisy, had a squeaky “little girl” speaking voice and an authentic New York accent.  You found it hard to believe where the sound was coming from when this delightfully diminutive creature belted out “Devil Gate Drive” with such gusto that would have put Suzi Quatro herself to shame. Absolutely brilliant!

Jayne and I came away with our ears ringing, hands stinging and our feet still tapping.

You’ll find the tour dates on their web site: