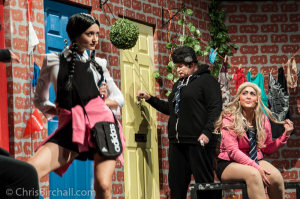 Desperate Scousewives
was devised and written by Liverpool playwright and actress Lynne Fitzgerald.

We were there on the first night when it premiered at the Seel Street Actor’s Studio back in October 2011.  It was hilarious. This cleverly written comedy was so well received by the audiences, and I wrote at the time that it was destined to go far.

Then disaster struck. Channel E4 Television went and brought out a fly-on-the-wall reality show with the same name in the style of The Only Way is Essex.

The television show went down like a lead balloon. It was pulled after eight episodes but the damage was done. As a result, Lynne had to fight hard to get her play put on, in and around the city, so reviled was the TV show by the people of Liverpool.

Eventually, Lynne’s persistence paid off. People came to realise it was nothing to do with the ill-fated TV show, and the play enjoyed success at a number of Merseyside venues including the Theatre royal in St Helens and New Brighton’s Floral Pavilion. 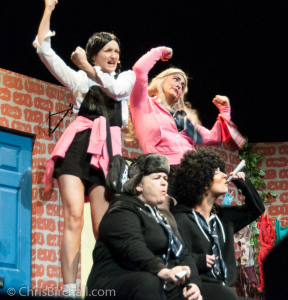 Now you know what it’s like… Films, TV programs and plays etc., start coming out with ‘numbered’ sequels; you look forward to each with anticipation and then all too often end up disappointed.

The film Rocky got as far as Rocky 5 and then added two more (named rather than numbered). But none of them really lived up to the first.

Well it was so not the case with Scousewives 2. Similar characters, yes, but a totally new script, brand new gags and a wonderful twist in the tale.

And Now the Third in the Trilogy… 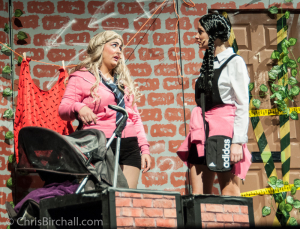 This weekend we found ourselves once again at The Floral Pavilion, along with a packed house waiting for the curtain to go up on Desperate Scousewives 3.

With the previous two incarnations having been so good, I must admit I was dreading the ‘Rocky effect”.  There is, after all, surely a limit to the number of story lines and gags you can come up with about four Scouse housewives living next door to one another?

I need not have worried. The play was very very funny and with brand new characters and fresh gags. 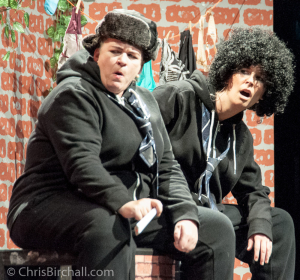 Desperate Scousewives 3 is subtitled: That Moment You Realise…  In a way, it could have been called “Scousewives in Waiting” because, for the first half at least, the main characters were teenage school-leavers.

Charlie Griffiths and Gemma Brodrick very convincingly portrayed gobby teenage girls desperately fending off the clumsy advances of two spliff-totting chavvy lads (Lynne Fitzgerald and Jenni Cartwright) whilst they got on with the serious work of taking selfies and pretending to be pregnant. 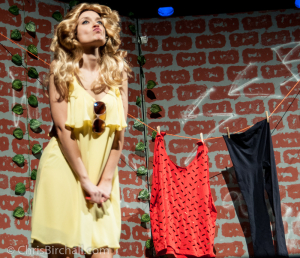 Lynne, of course is well known for her myriad faces and on-stage persona, and she and Charlie are both seasoned in the art of desperate scousewifery. I must say, however, newcomers Gemma and Jenni acquitted themselves admirably and all four actresses adapted well to each of their diverse characters and had the capacity audience in stitches throughout. 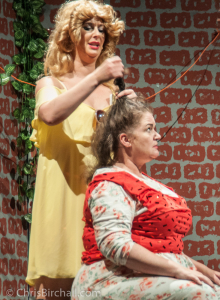 Sadly the play was only on for two days, so I can’t really tell you to get along to see it.

It deserved a far longer run, but I’m sure it will be staged again at various venues, in which case you really should keep a look out for Desperate Scousewives 3 and make sure you grab a ticket before they sell out – as they surely will, such is the following Lynne has built for her excellent comedies.