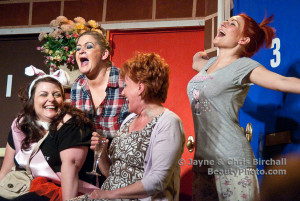 Desperate Scousewives is a (very) loose parody of the similarly named American comedy drama and is the latest play to come from the pen of Liverpool actress Lynne Fitzgerald.

This brand new comedy is an absolute scream from start to finish.  The plot revolves around the occupants of four terraced houses during the days leading up to and following the wedding of the gobby 20-something character played by Philippa Goodwin, who also choreographed the play’s comedic dance sequences.  A wedding, incidentally, which takes place in Walton Jail to a prisoner she’d never met and only ever known as a pen pal! 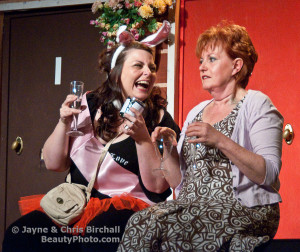 A newcomer to the terrace, played by Lynn Francis, tries desperately and clumsily to fit-in with her new neighbours without realising the other three already know that the house she’s just moved into, Number One, is owned by a battered wives association.

It soon becomes clear, however, that the occupant of Number Two is currently in an abusive relationship and when she accidentally kills her bullying husband, a whole string of hilarious co-incidences conspire to divert suspicion away from this down-trodden character, played so well by Clare Bowles.

In fact, the cast of four talented Liverpool actresses brought these very diverse characters to life brilliantly, with the bossy, loud-mouthed occupant of Number Three being portrayed by Lynne Fitzgerald in her own inimitable style. 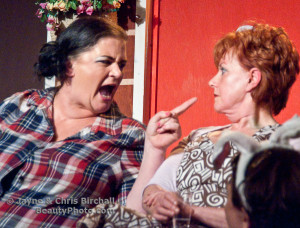 Such was the success of this comedy’s first week, the second and final week of its run at the Actor’s Studio in Liverpool is now completely sold out.

The enthusiasm with which this comedy has been received by its audiences thus far, has almost guaranteed it will be staged at larger venues throughout the region. In fact I’m delighted to be able to tell you that tickets have just gone on sale for a four-day run at the Theatre Royal, St Helens from the 25th to the 28th of January.

January 2012 Update
Please note: The fabulous play has absolutely nothing to do with the dreadful and much reviled so-called reality show of the same name that is currently running on E4.

See also my comments on the Liverpool Echo’s review