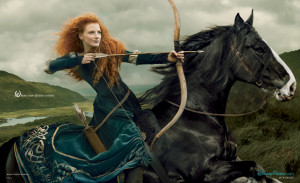 Annie Leibovitz is no stranger to celebrity. To simply state that she was the photographer who persuaded John Lennon to strip naked and curl up on the floor next to Yoko, that she shot the naked pregnant Demi Moore, or that she photographed a 15 year old Miley Sirus topless long before the Wrecking Ball era, would be grossly flippant.

For 65 year old Annie has photographed more celebrities, clothed and unclothed, than most of us have had hot dinners.

It is also hard to believe that this fabulously talented photographer almost became spectacularly bankrupt which would have resulted in her losing the rights to a $50 million back catalogue of images.

Happily, she survived that dark period of her life during which she also lost her father, mother and partner, Susan Sontag.

Now she is back with a vengeance and fully embracing the age of digital photo manipulation with a fine series of Disney Dream Portraits featuring the likes of Taylor Swift, Russell Brand, Johnny Depp and Penelope Cruz.

Click here to view the rest of the images