Dog in a Bluebell Wood 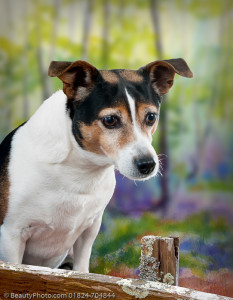 Looking through the archives I was reminded that twelve months ago today the family I was photographing in the studio announced they had their little doggie in the car and would like a photo of him too.

Little Doggie, on the other hand had other ideas and decided there was no way he was going to sit still!  In the end we decided we would opt for a close-up of the little fella whilst on his owner’s knee where she could keep a firm grip.

Unfortunately the plain background was a little uninspiring.  However this same customer was also an accomplished artist and had previously asked me to photograph a watercolour for her.

It was a painting of a bluebell wood which made a perfect backdrop for the doggie portrait. I used Photoshop’s Lens Blur filter to defocus the background which gave it a realistic yet painterly feel.  Then, rather than crop the image even closer I found a stock image of an old mossy fence to include in the foreground.  This not only hid the lady’s hand but added depth and perspective to the finished portrait.