After all that rain yesterday, you’d have expected the rock festival to have been a complete washout.

However, there was no chance of last night’s event ever degenerating into a communal mud bath, because this was the first outdoor festival to be held indoors!

The summer of love has come to Liverpool’s Royal Court Theatre in the form of Jim Cartwright’s play Eight Miles High. The whole theatre was transformed into a farmer’s field. All of the theatre staff – and many of the audience too – were dressed in Caftans and had flowers in their hair. The set was magnificent, with the grassy stage extending right into the auditorium so that those occupying the front rows were actually sitting on the grass, picnic style, as the whole audience effectively became part of the show as festival-goers.

This is a play about the music, the hippies, the free love and flower power of the sixties. 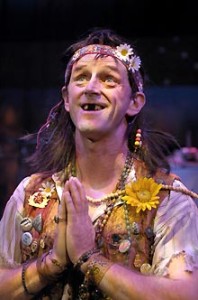 This extremely talented cast performed a whole raft of iconic numbers from the days of Sargent Pepper, with a good sprinkling of Hendrix, Dylan and the like, thrown in for good measure!

They gelled like a rock band who had been performing together forever. They produced a sound every bit as good as any band I have seen playing live – in fact better than many! Remarkable when you consider they are a bunch of actors brought together a few short weeks ago to rehearse for this play.

They were all great. Paul Broughton (remember Eddie Banks in Brookside) portrayed a very convincing Hell’s Angel. For me though, the star of the show was Royal Court regular Andrew Schofield (pictured) who played the archetype hippy. Yeh! Far-out maaan!

Last night was the first performance of the play’s month-long run. It is a unique experience not to be missed. Do make sure you get to see this show before it ends on August 16th. It is fan-bloody-tastic!

Update: See the last night review in “comments” (below)