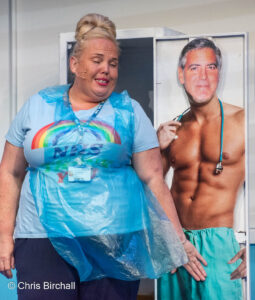 Ellen has been finding things tough going recently. She’s been single for quite some time and the lockdown hasn’t helped.

She had hoped that by becoming a volunteer at the vaccination centre, she might meet someone who would sweep her off her feet but the only one she really connected with was George Clooney. Yes, THE George Clooney. Well, okay, a cardboard cut-out of the hunky actor secreted on the inside of her locker door!

Rigby is a reclusive former rock musician who’s been practising anti-social distancing for decades. The lockdown hardly changed his life at all, and it was with reluctance and reservation that he eventually made his way down to the local vaccination centre. 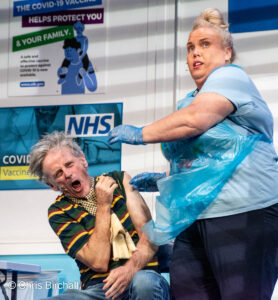 Their eyes met and neither liked what they saw. However, one botched jab and a semi paralysed arm later, and Ellen was moving into Rigby’s gaff to, erm, “look after him”.

And so begins the most unlikely boy-meets-girl love story. It hilariously unfolds, going from stony cold indifference to red-hot passion, with a lot of laughs courtesy of two of Liverpool’s finest comedy actors, Lindzi Germain and Andrew Schofield. 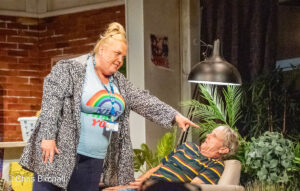 The Royal Court’s period of closure has left its patrons hungry for a great night out, and writer Gerry Linford, used this time to create a topical comedy of the raucous calibre for which this unique theatre is renowned, whilst weaving into the script, some poignant, touching moments that acknowledge the way this pandemic has touched so many of our lives. 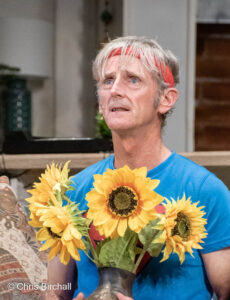 With two great sets making excellent use of the theatre’s revolving stage, the whole shebang was knitted together perfectly by director Stephen Fletcher. There’s some great music throughout the show, including a couple of songs from Schofield, playing guitar live on stage, perfectly befitting his role as a former rock musician.

When we attended Press Night, the Alert Level 2 restrictions meant the auditorium was capped at 50% capacity, with socially distanced seating. Meals were being served in the stalls as normal and delicious there were too. It was table service only for drinks and I have to admit, the friendly and attentive staff did a marvellous job. I, for one, felt very comfortable with the arrangement. 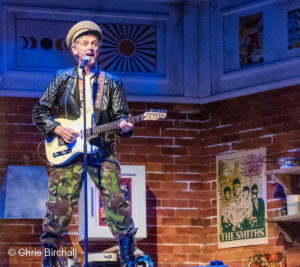 The management is currently considering what will happen when all restrictions are lifted on July 19th, with a view to possibly allocating certain parts of the auditorium for those who would still feel happier maintaining the status quo.

A Shot In The Arm
We all need some sort of tonic to get us back to a degree of normality and Doctor Hairy Photographer has no hesitation in prescribing an injection of comedy to top up your AstraZeneca.

“Ellen and Rigby” runs until the end of July and you can reserve your tickets here.