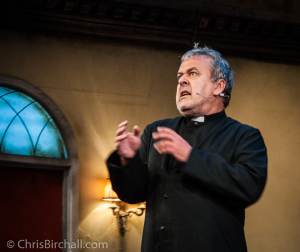 I can tell you from experience, that it’s one of the scariest things – to walk out on stage by yourself, in front of an auditorium full of expectant people. And I imagine it’s even worse when you are about to perform in the very first play that you’ve written yourself. So I wonder what the best tactic should be when that auditorium is full of journalists who have turned up especially to review your show.

In such circumstances, I guess you should choose your words carefully for your opening gambit. Well, how about, in your best drunken Irish priest accent, something along the lines of: “Ah. Press Night. Just look at you all, yer great shower of bastards”! 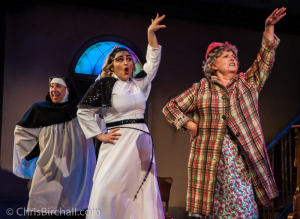 Haha! Only the inimitable Alan Stocks could carry off a stunt like that in front of one of the most critical of theatre audiences: The Reviewers. Not only did he get away with it, but every one of that shower of bastards spent the next two hours laughing until their ribs ached, before rising for one of the most enthusiastic standing ovations I’ve ever witnessed on a Press Night .

In The Beginning
Father O’Flaherty is a character originally conceived by Liverpool playwright Fred Lawless for “Merry Ding Dong”, his first ever Christmas show for the Royal Court, and Alan Stocks was cast for the part. I remember watching that play back in 2009 and thinking that this was the best drunken priest I’ve ever seen played by a stone cold sober actor. 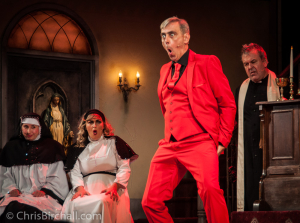 He went down so well with Royal Court audiences that Father O’Flaherty was written into the theatre’s next Christmas show and the next, and the… Well I think you get the picture.  I get the feeling Fred Lawless came up with so many fabulous scripts by starting with a title and figuring how Father O’Flaherty going fit into this story line, before writing the rest of the script around him!

You Can’t Get Rid of the Good Father
Alan made the character his own. But with Fred Lawless taking a sabbatical from writing the Christmas show, it looked like it looked like the good father’s run was about to come to an end. 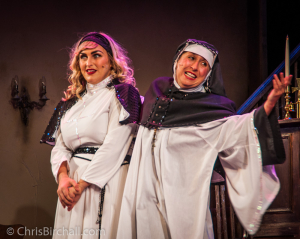 But the Royal Court producers were having none of it. They asked Alan if he would consider writing a new play himself, based entirely around the drunken Irish priest.

It was quite a challenge for someone who’d never actually written anything himself before, and he was the first to admit it was a somewhat daunting task.

Alan needn’t have worried, Having come to know Father O’Flaherty rather intimately through the five or six previous plays, the whole thing came to together – not only effortlessly, but rather brilliantly. 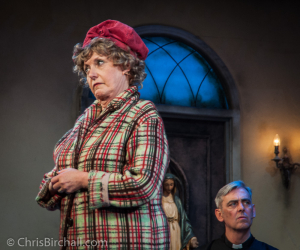 With the help of four talented fellow actors Paul Duckworth (Father Devlin and God), Clare Bowles (Mrs Ruby), Helen Carter and Keddy Sutton (who played the good Sisters, Harley and Davidson) and one of the best directors in the business, Bob Eaton, they have come up with one of the craziest comedies I’ve seen in a long time. And this is no mean feat in what has been a particularly good year for scouse comedies!

Paul, who we are used to seeing cast as the bad guy, played a devilishly phoney cleric and an almighty big bad God.

Being Irish, Clare had no trouble with the accent as the priest’s grumpy housekeeper. The grumpy bit was damn good acting though, because she’s a lovely lady in reality.

There were some cracking musical moments amid the comedy. Helen Carter, in particular, belted out some superb numbers.

And Keddy Sutton… Well what can I say… Playing the part of a nun with multiple personality disorder, she hilariously transformed into some wonderfully convincing characters, including Peggy Mitchell and Cilla Black. 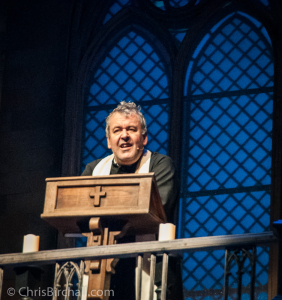 About to deliver a sermon, and having misplaced his bible, the good priest declares: “Feck it, I don’t need the big book”. His cleverly scripted ‘Ad lib’ of the Gospel according to ‘Cool Hand Luke’ left hardly a dry eye in the house – and the same goes for a few of the seats too, I wouldn’t wonder!

In the league of five star comedies, Father O’Flaherty Saves Our Souls is definitely a five star plus. Do yourselves a favour. Get along to Liverpool’s Royal Court Theatre before the 12th of November. I promise you won’t regret it.

Twopence to Cross the Mersey Merry Hell at the Hermon