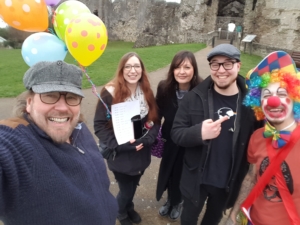 One of the nice things about being retired is that, to a certain extent, I can pick and choose what I do. And I can respond readily to requests such as “Dad, are you free on Sunday to manhandle the GoPro?”

The brief was to spend two minutes filming Isaac and his pal Andy walking along a path miming to the new single off their latest Cats and Crows album, Winter.

The song, A Certain Kind” is actually four minutes long. The idea was to film him miming at double speed to impart a nice flow to the footage.

So it would involve walking quite fast but that was okay because the GoPro was to be mounted on a Gimble, effectively turning it into a SteadyCam which would iron out the bumps.

Ah… hang on… all this would need to be done walking backwards down a winding, uneven path littered with obstacles such as signs and fence posts. And all whilst Andy clowns around (literally) with water pistols, balloons and exploding Coke cans. Not quite so simple as the initial brief suggested but a lot more interesting nevertheless.

Isaac had made a detailed script for Steph to stage-manage and shout out the carefully timed cues. We had a couple of dry runs to rehearse, whilst Jayne broke out the face paints to complete Andy’s transformation.

When it came to the actual shoot, Jayne walked alongside me with a hand on my shoulder. She had to be the eyes in the back of my head, guiding me around corners and past the obstacles so I could concentrate on the framing, whilst Steph kept out of shot, timing everything, shouting prompts and handing the various props to Andy the clown.

We did it in four takes and I had the good grace to avoid falling arse-over-tit until right at the end of the last segment, much to the delight of the onlookers gathered at the windows of the nearby houses.

Then it was off to Isaac’s man cave where he carefully edited the footage. It was good to see his vision of the video come to fruition. And over 7,000 FaceBook views over the first three days was a great way to launch the single.

A Certain Kind is the first single from the Cats and Crows album, ‘Winter’