Folk on the Dock 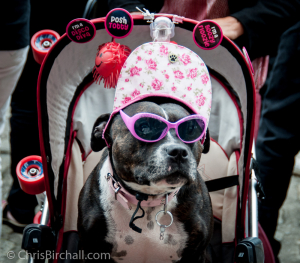 The Hell was Merry, the Eleanor was Nelly, plus a bespectacled dog who’s been on the telly.

Liverpool held it’s first ever “Folk on the Dock” festival over the Bank Holiday weekend. BBC Radio DJ Janice Long hosted the event, and with over 30 acts performing on two main outdoor stages, two concert venues and several smaller stages (some on the deck of boats moored in the Albert Dock), there was something for everyone.

Best of all, apart from the evening indoor concerts, the whole thing was free!

We were only able to go on the Saturday this time, so we missed out on seeing some of our favourite acts, but next year I have a feeling the entire weekend will be on our itinerary.

Here are some of the highlights featuring Folk Rock Band Merry Hell, Liverpool singer Eleanor Nelly, a couple of Shanty Singers and a bespectacled dog 🙂 .

A Fistful of Collars Plus Frocks, Frillies and Fabulous Fun Twopence to Cross the Mersey