Four Girls in a Caravan 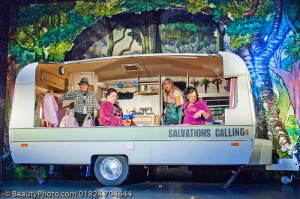 Next time you feel smug at having nabbed the last space in a Merseyside car park, you’d better hope the other person who had her eye on that space wasn’t Sylvie Gatrill, or you could get back to find your car’s been cut in two with a chain-saw!

You see, Sylvie ‘knows people’ – mainly stage hands and scenery builders in the region’s theatre-land – who are quite adept at the art of vehicle dissection!

And if proof were needed, the play that has just finished its run at the Royal Court, Night Collar, featured a black taxi cab with its roof and side removed to give the audience a clear view of the action, and now a caravan has been afforded the same treatment for the latest offering at the Theatre Royal in St Helens.  Both plays were directed by Sylvie Gatrill.

Four Girls and a Caravan is a brand-new comedy written by Liverpool actress Lynne Fitzgerald and her partner Steve Simpson.  It explores the relationship between four friends as they embark on a fateful holiday in the welsh hills.

All seems rosy as the brash and rather ‘worldly’ Stacy and Danielle (played by Lynne Fitzgerald and Lynn Clarke) and the pseudo posh Rhonda (Claire Bowles) hilariously recount their adventures and past conquests to their younger and more naive travelling companion.

Played by former Brookside actress Suzanne Collins, Amber Hawthorn’s first lesson was that however good you look in tiny pair of tight shorts, coupling them with expensive designer boots is not a good idea as you traipse across a rain-swept hillside.  Cow dung is not the most alluring fashion accessory!

But there was more, much more, for this dizzy blond to learn in what was to become a baptism of fire.  Quite literally actually, as Scene One ended with the caravan being blown to bits in a gas explosion!

There can’t be many stage plays where the four main characters die a third of the way through.  The thing is, these girls didn’t realise it until the end of the second scene which they spent, quite literally, in limbo.

The second half of the show saw the four at the Pearly Gates negotiating their fate with a three-foot tall Saint Peter who – if you didn’t already know – is a scouser! The same actor, Shaun Mason, then performed some sort of celestial transformation to become a six-foot game show host in the fourth and final scene.

Helped by the obligatory game-show eye-candy in the form of Chantelle Nolan, the Huey Green like character took the four girls through a truth-or-dare type confessions game.  As each of the dead friends vied for a place in heaven, the revelations shocked all four!

I won’t spoil it for you with the details, or reveal whether they went ‘Up’ or ‘Down’.  Suffice to say, there was a guest appearance from God (albeit on the silver screen) in the form of Radio City presenter Pete Price.

Four Girls in a Caravan is a great new comedy and it’s a shame there are only four performances in this it’s first run.  It deserves a longer showing and there would be no better venue than the Royal Court in Liverpool with it’s larger audiences who love, appreciate and expect this kind of raw scouse humour.  I do hope the caravan gets towed there soon!

You can hook up with the characters on Facebook. Amber, Rhonda, Stacy and Danielle

The play runs at the Theatre Royal, St Helens until Saturday 10th July 2010