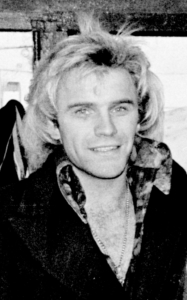 It was so sad to hear today of the passing of Freddy Starr. I met him back in the 1960s when, as a fledgeling pop star, he performed at the old Picture House in my home town of Ruthin in North Wales. He appeared here three times and my band, The Executioners, were the support act.

Freddy would have been about 20 or 21 back then and was already exhibiting the zany manic behaviour that would become his comedy forte.

My memories of Freddy in those early days at Ruthin were that on stage he was a brilliant singer and, incidentally, one of the best Elvis impersonators ever. Offstage, he was what you would have called a bit of a lad. Never still, never quiet. He had us in stitches for much of the time and he drove the then manager of the Picture House to distraction.

I never saw him eat a hamster. 🙂 Basically, I remember him as being a nice bloke.