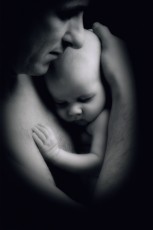 This day in 2004 we created this touching portrait of a father and baby which went on to win a Merit Award in the 2005 UK FUJI DISTINCTIONS AWARDS, announced at the annual “Focus on Imaging” trade event held in the NEC Birmingham.

We entered  in this prestigious event on three occasions before they changed the rules to allow film only (no digital images) and twice featured as finalists.

Having also won several quarterly heats in the Kodak Wedding and Portrait Awards, in 2002 we won the title Kodak Open UK Portrait Photographer of the Year.