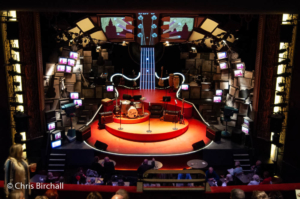 When those words were uttered by John Lennon back in 1963, four young Liverpool lasses set out to prove him wrong by forming the world’s first all-girl rock ‘n roll group.

Mary McGlory, Pam Birch, Valerie Gell and Sylvia Saunders took the city by storm, performing at its many clubs including, of course, the most famous of all, The Cavern.

This wonderfully energetic and uplifting play charts their journey from Merseyside to the legendary Star Club in Hamburg and beyond. And it does so in true Royal Court style, through the medium of music and song, performed live on stage by as talented a bunch of young actors as you will find anywhere. 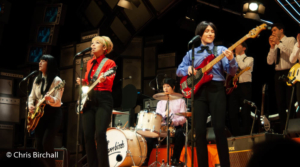 In fact, casting for this show couldn’t have been easy, because the producers had to find four girls in their teens or early twenties who could not only play the guitar and sing but also convincingly and faithfully reproduce those distinctive sounds of the sixties.

They also had to have convincing accents of course.

Molly Grace Cuttler, Alice McKenna and Sarah Workman drew upon their acting skills to achieve this, whereas for Lisa Wright the process was almost inverted.

Having trained at the Liverpool Institute for Performing Arts, she found herself having to reverse-engineer the accent into the much softer dialect of sixty years ago. As a recipient of the LIPA Acting Prize for Performance, however, that was never going to be an impossible task.

The boundless energy on that cleverly designed stage was infectious, as they belted out song after song. Twenty-two in all, including many well-known earworms of the era such as “Roll Over Beethoven”, “Too Much Monkey Business”, Got my Mojo Working” and “Peanut Butter”. So infectious in fact, that the packed audience were not only clapping their hands and singing along, they were quite literally dancing in the aisles. 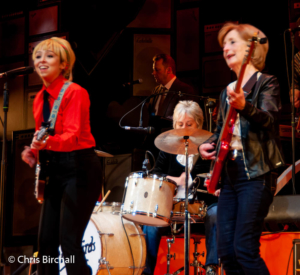 Although somewhat overshadowed by the girls, six equally talented male actors made up the rest of the cast, variously playing the parts of (among others) the Beatles, The Rolling Stones, Brian Epstein and Manfred Weissleder, the owner of Hamburg’s Star Club, who went on to become the Liverbirds’ manager.

Just as the audience were about to relax back into their seats following the most animated standing ovation I have ever seen, the young Liverbirds beckoned two ladies from the auditorium to join them on stage. It was the original band’s drummer Sylvia Saunders (now Wiggins) and bassist Mary McGlory (now Dostal). And it was not just for a curtain-call either, for these two ladies, now in their seventies, took to the bass and drums to rock the Royal Court as if they were still in their heyday.

It was a fabulous way to bring the curtain down on a truly fabulous show, one I will remember for a long time. In fact, I want to get to see it again before the end of its run on November 2nd.

It gets 5 stars from me without any hesitation.