Golden Oldies at The Royal Court

When the invite came through for The Golden Oldies, I read the synopsis with interest and more than a little amusement, because I identified with it in more ways than one.

The story is set in a music club for the over-sixties, where the likes of “Jerusalem” are about as ambitious as their repertoire gets. Until, that is, the arrival of ageing rocker Benny armed with electric guitar, Hendrix hair and wah-wah pedal. 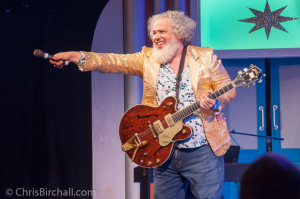 I always look forward to the fantastic musical comedies that have become the Liverpool Royal Court’s raison d’être, but this particular story line grabbed my attention because Jayne and I ourselves run a music club which, whilst not exclusively for the over sixties, does have a good percentage in this age group, including myself. And during our club’s twenty year existence, it too has gone from purely traditional folk, to appealing now to much broader and eclectic musical tastes.

The irascible Benny is played by Paul Kissaun, a genuine ageing rocker who is not only a fine actor but an accomplished musician too, having served his time as a member of 80’s band The Flying Pickets. Benny’s nephew Matt, played by Greg Fossard, is his partner in crime – not that broadening the oldies’ musical tastes to embrace rock n’ roll can be called a crime. 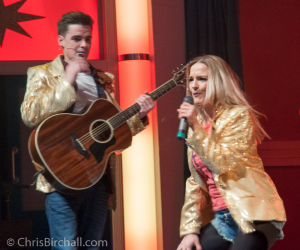 The plot takes us on a predictable but pleasant journey with plenty of great music and a lot of laughs. And interwoven, there are the inevitable love interests, not only within the elderly contingent, but also between Matt and the young Faryl (played by Hayley Hampson) who’s been assigned to the oldies’ music club courtesy of a community service order.

As well as being one of the theatre’s up and coming young actresses, the lovely Hayley is also an accomplished singer/songwriter, and her performance in this show has certainly made the most of all her talents. 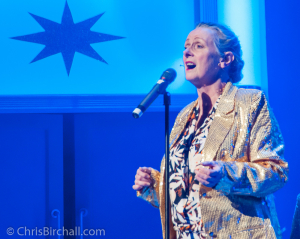 Of the club’s original choir members, the character of alzheimer’s sufferer Beryl soon took centre stage, and Dave Simpson’s script dealt accurately and sensitively with the way that dreadful disease takes the memory but how the music is the last thing to go.

The producers could not have cast a better actress to play this part. The talented and wonderfully hilarious Eithne Browne’s portrayal of the sad Beryl brought a lump to the throat and a tear to the eye, whilst her singing voice left you spellbound.

I’m not going to spoil it for you by telling, but do look out for her performance when The Golden Oldies end up in the finals of a talent show. What the hapless Beryl blurts out during “Talkin ‘Bout My Generation” has been responsible for me randomly laughing out load every time I think about it.

If you are a lover of music and of comedy, I cannot recommend The Golden Oldies highly enough.  It runs at Liverpool’s fabulously refurbished Royal Court Theatre until the 14th of May and you can get hold of tickets from the on-line booking office.