It would be hard to imagine a better location for a small intimate music festival.

A field, effectively set in its own miniature valley, sheltered from the wind, adjacent to ample parking and a decent sized camp site, just far enough away from the village so as not to upset the locals.

Oh, and did I mention… right next to fine country pub selling Real Ale! 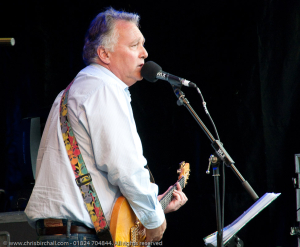 Graig Aid has been in existence, in one form or another, since the turn of the century when the very first such event was staged at The Three Pigeons Inn at Graigfechan, with bands playing on a make-shift stage in pub’s the roadside car park.

That early flush of success heralded a move to its present location in the field behind and below the pub. Well… for three more years at least! Because a change of ownership in 2005 saw the festival forced to relocate to various alternative venues within the town of Ruthin four miles away. This less than ideal, itinerant existence almost put an end to Graig Aid, until 2012 when the new, present landlords agreed to allow the festival to return to it true home. 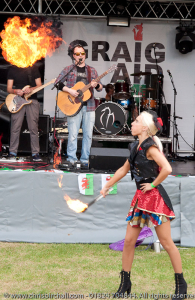 Graig Aid is organised by a group of volunteers under the leadership and guidance of Peter and Linda Jones and over the years has raised over £60,000 for various charities including St Kentigern’s Hospice, Hope House, Nightingale House, Ruthin Community Hospital and the St John Ambulance.

This year’s two day festival was a resounding success. Having failed to dampen the fun and enthusiasm, Friday evening’s dismal weather  promptly gave way to a warm and sunny hiatus for the all-day portion of the event on Saturday.

It was a wonderful “family day” atmosphere. There was something for everyone, with jugglers and clowns, stilt walkers and fire-eaters to entertain, between the musical acts.  These ranged from laid-back folk and country singers to heavy rock bands and included a guest appearance by The Voice finalist, Joe Woolford.

Some of these acts are captured in the pictures below and a roll call of the full line-up can be found on the Graig Aid festival website.