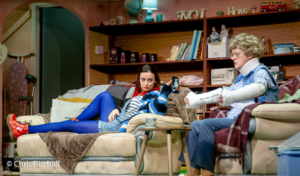 Devotees of the Royal Court will know how they love to take a classic and turn it into a contemporary scouse comedy.

The Christmas shows, in particular, go far beyond predictable pantomime rewrites. They have a nack of taking the raw bones of a storyline, throwing away the script and rebuilding from scratch upon the original foundations. Some of the more memorable being The Scouse Cinderella, Hitchhikers Guide to Fazakerley, Nightmare on Lime Street, and Little Scouse on the Prairie. 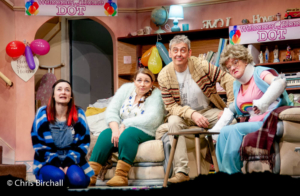 And so it is with Gerry Lindford’s Yellow Breck Road, which doffs its cap to The Wizard of Oz and then takes off on its own unique trajectory. And what better strategy for Gerry’s second stage play than to aim for the Moon.

Just like in MGM’s classic film, the play’s central character is called Dorothy, or in this case Dot for short, delightfully played by Gemma Brodrick, but the closest we get to a Tin Man is the feckless handyman Barry, resplendent in a NASA space suit.

Everything that can go wrong, is going wrong for Dot and her family. She is an agoraphobic young woman with a mobile phone welded to her ear and her parents are facing eviction from their Breck Road home. Then things get a thousand times worse when Dot’s uncle Barry, played by Jake Abraham, performs a botched electrical repair causing a shocking accident. This puts poor Dot into a coma, during which she is transported, not to Munchkinland like her Wizard of Oz namesake, but to the Moon, no less. 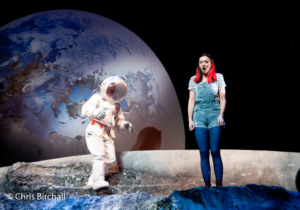 The theatre’s creative set builders put the recently recommissioned revolving stage to good use, transporting us seamlessly from the family’s living room to the surface of the moon and back, as the cast were kept on their toes delivering cracking comedy and ‘soft lad’ slapstick, plus some touching and poignant moments too.

Paul Duckworth, Jamie Greer, and Lynn Francis, in particular, had us in stitches as, from scene to scene, they morphed from their adult characters into their 7-year-old selves and then into teenagers. 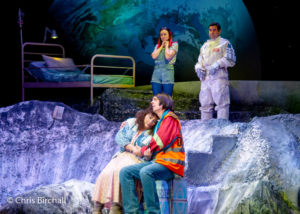 And Eithne Browne’s portrayal of a grumpy old granny was just magnificent with an abundance of toilet humour, cranky one-liners and with a nice dose of pathos thrown in for good measure.

Yellow Breck Road is an excellent second stage play from the pen of Gerry Linford, honed to perfection by director Bob Eaton. It runs until March 2nd and is well worth giving your chuckle muscles an outing.