Hey Girl, Show us your Tips 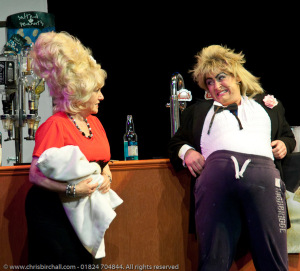 So the boozer has double booked.  They have two functions on the same day. A Wedding “Do” and a Funeral Wake.

But hey, they can cope.  Can’t they…? After all, they employ two of the most level-headed efficient waitresses in the business. Don’t they…?

Ah. Hang on a minute.  Remember… this is a play written by the talented comedy actress and writer Lynne Fitzgerald.  So let’s just rewind there. These waitresses are of course two of the most head-in-the-clouds, dilatory scouse girls who think waitressing means waiting around until it’s time to go home! 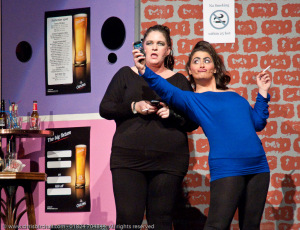 Dumbass Ashleigh, played by Lynne Fitzgerald and sexy Jennifer (Charlie Griffiths) decide to try and impress their boss whilst preparing the buffet.  “This potato salad needs spicing up. I’ve seen it on Nigella”.  Unfortunately, they mistake the urn containing the deceased’s ashes for pepper, so the funeral party end up eating their departed granny!

Realising their blunder, the girls embark on a chain smoking marathon in an attempt to restock the urn with fag ash! 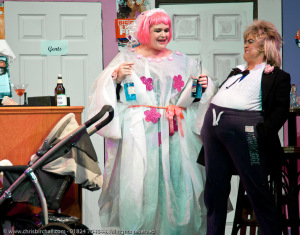 As is tradition, every wedding and funeral has its fallings out.  But when the two come together in the same room and everyone realises what – or rather, who they have just eaten, world war three breaks out.

The “fur coat and no knickers” landlady, Rita, played by Clare Bowles, does her best to contain the mayhem from under her towering blonde beehive.  And eventually her put-on “posh Liverpool” accent gives way to foul-mouthed broad scouse.

Throughout all the mayhem, Frank, the down-trodden landlord,  played by comedian Mickey Finn, manages to drink the profits without spilling a drop.

This new comedy is full of fun and frollics, scouse brows and “Ooo-ers”, and it deserves to go far.   There is more than a smattering of …ahem …down to earth language – so don’t bring your granny unless she is broad-minded, deaf or in an urn.

Hey Girl Show us your Tips is on at St Helens Theatre Royal Friday and Saturday, September 19th and 20th, with a 2.00pm Matinee on the Saturday.

Highway to Hell How to organise wedding groups