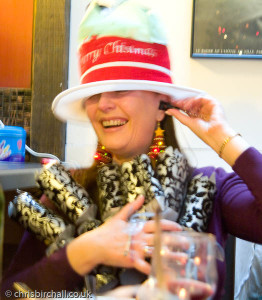 We’ve had many a bum deal at Bum Bargains (you know where I’m talking about). We’ve had “Puracell” batteries that leaked acid under the Christmas tree, a festive hat that said “MERRY CHISTMAS” (Rs are in short supply when there’s an R in the month) and a friend of ours even had a fish die after being fed on (supposedly) brand named fish food.

Having vowed never to darken their door again, Jayne sheepishly admitted she had already become the proud owner of a box of classy looking black and white, velvet finish Christmas Crackers from that very store!!

We nervously ate our Christmas dinner, knowing that the inevitable was about to happen. Yes – before the Chirstmas pud could be served we would have to go through the annual ritual of pulling the Christmas Cracker. Only this year there was the added anticipation of wondering if we would manage to live though the ordeal!

The crackers certainly looked good for £3.99. But that didn’t stop Jayne and I testing the first one wearing an oven glove each and face masks before risking them on the rest of the family.

As pulls go it was fairly uneventful. There was the obligatory “crack” – and of course Jayne won (Jayne always wins 🙂 )

Out popped at ball point pen! The remaining five crackers were (somewhat reluctantly) pulled and Jayne’s booty mounted: Headphones, a torch (that worked!), a set of make-up brushes and a corkscrew.

Not a flimsy plastic car/whistle/spinning top in sight! There were paper hats, of course, and the usual silly joke. But even these were not as bad as usual. In fact – amongst them was one of the best I’ve ever seen in a cracker (maybe the Shiraz helped).

It went:
“What do you call a chicken in a shell suit?”
Answer: “An egg”