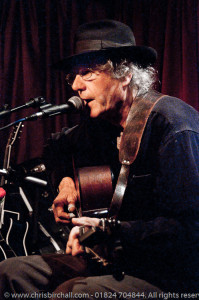 It think it’s fair to say I’ve never heard a guitarist play so well whilst he was ‘plastered’.

In fact, being ‘plastered’ is one of the prerequisites for Jim Reynolds’ articulate and faultless finger-picking style.  You see, I’m not talking about alcohol here, I’m referring to the way Jim uses sticking plasters to affix his specially adapted picks to his fingers and thumb.

He has thus developed a unique style that runs throughout his performances and across a diverse range of genres encompassing blues, ragtime, rhythm and blues, music hall and folk.  He effortlessly squeezes a distinct and pure sound out of his favourite well worn guitar, which he put through its paces, changing to many different tuning patterns throughout the set. 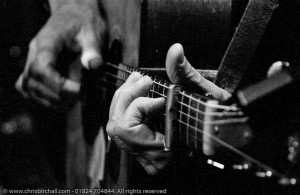 His guest appearance at the Rhyl Folk and Acoustic Club last week was thoroughly enjoyed by the packed house at their Rhyl Football Club Hospitality Suite venue, where some of the regulars of longer standing remembered the Bristol based singer/songwriter from his last visit some ten years ago.

Jim played a mix of his own songs, some autobiographical, about life, loves and losses, some reflecting his wry tongue-in-cheek humour, as well as a smattering of both contemporary covers and classics.  It was fascinating to hear Hoagy Carmichael’s 1920s classic Starlight Melody and the 1940s A Nightingale Sang in Berkeley Square being brought up to date in this way. 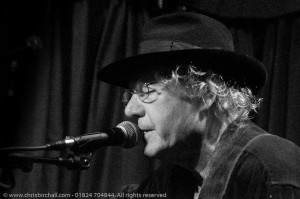 To top it all, he is a nice guy. A Gentleman Jim. Unassuming yet entertaining.  During my own spot at the mic just before his second set, I remarked about how he looked a bit like Bob Dylan. When Jim came back on stage he proudly announced that Dylan had actually mentioned him during one of his concerts.

He went on to explain how he got this mention: Apparently a pal of his was in the audience and when the great man asked “Any requests?”, for a laugh his pal shouted “Yes, do a Jim Reynolds song”.  To which Bob Dylan replied “Who the fuck is Jim Reynolds?”

All in all, a great evening’s entertainment and we were grateful to Jim for making the journey up from Bristol.  Good music and good humour. And in the tradition of the Rhyl club, as well as Jim’s two 45 minute sets, no fewer than a dozen regulars managed to get a spot each too.