Ladies Day at the Royal Court 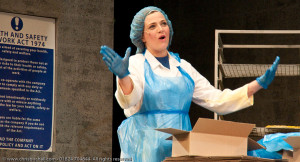 So what do you reckon a bunch of  hard-up factory girls do to unwind once a dull and dreary week of packing fish has taken its toll?  …Bingo? …Karaoke? …A knees-up down the pub?

Surely a day at the races would be way out of their league.  And you’d think something really fishy was going on if they aspired to go to the races on none other than Ladies Day!

Nonetheless, that’s exactly what they decided to do; scratching together their meagre savings and taking their best frocks out of mothballs, they headed to Aintree to rub shoulders (and other parts of their anatomies) with well-heeled and well-oiled, jet-setters.

Writer Amanda Whittingham’s observational script about the interaction between four workmates of diverging personalities, was cleverly adapted by the recently appointed new artistic director Ken Alexander to fit seamlessly into the genre of uniquely scouse comedies for which the Royal Court Theatre has become famous. 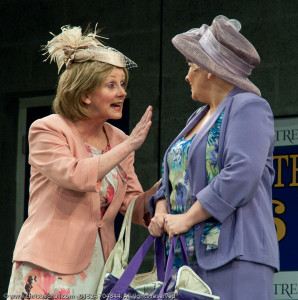 Two of the actors who’ll have had no trouble navigating the theatre’s backstage labyrinth  are Eithne Browne (left) and Lynn Francis, who played Pearl and Linda.  Between them they have a list a mile long of appearances here.

Their TV and Film Credits are equally impressive, with Eithne’s including Brookside, Emmerdale, The Royal and Doctors.  Lynn has also appeared in Doctors as well as Hollyoaks, plus both the film and stage versions of Reds and Blues. 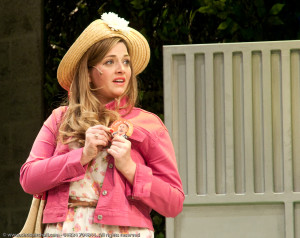 Playing the part of dippy blonde Linda, Angela Simms (left) is a relative newcomer who recently appeared at Liverpool’s Epstein Theatre in If the Show Fits.

Last year she was Sue in Rita Sue and Bob Too – a play Jayne and I thoroughly enjoyed at the Theatre Royal, St Helens. I’m absolutely certain that her current stint at the Royal Court will be the first of many.

To say that the deliciously diminutive Roxanne Pallett raised the “dolly bird” stakes would be true but at the same time totally ungenerous.  Her nomination for “Sexiest Female” for her role of Emerdale’s Jo Stiles-Sugden is the one that got her all the press coverage and Hello-style bikinied photo shoots. However, she was also nominated “Best Actress” in the soap for her emotional and agonizing portrayal of a battered wife.

She also proved herself as a singer by winning Celebrity Stars in their Eyes.  Now, returning to the city where she gained her degree in Media and Film Studies, she has proved herself as a comedy actress, slotting into the cast as effortlessly as any Royal Court regular.  Her portrayal of the wannabe WAG brunette bombshell was just brilliant. 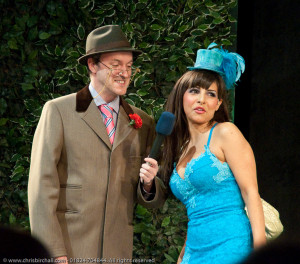 Although his TV credits are many, including Corrie, Emerdale and Holyoaks, the only male member of the cast is no stranger to Liverpool’s theatre land and loves working at the Royal Court.  And whilst the four ladies had just one character each to play, the talented Jack Lord had no fewer than five, proving that men can multi-task!

For this play he not only had to portray everything from a posh spiv to an Irish jockey, from a factory foreman to a dead bookie, he had to become a master of the quick change, often appearing back on stage as a different character only seconds after exiting as the previous one!

Before the show, I joked with one member of the audience that he was only here to ogle the lovely Roxanne.  He joked back: “No. It’s Jack Lord… I’m a Hawaii five-0 fan!”

I pondered how getting the late Jack Lord on board would have been a real coup for the Royal Court – but that he would probably  still have appeared on stage more times than the errant David Gest did last Christmas!

All five cast members, with their individual cameo story-lines that unfolded throughout the play, gave a faultless performance.  Each delivered their comedy lines with side-splitting hilarity.  This uniquely scouse variety of hilarity has become stock-in-trade for the Royal Court – so much so, that each production here becomes a hard act to follow.  The cast of Ladies Day however, pulled it off beautifully. 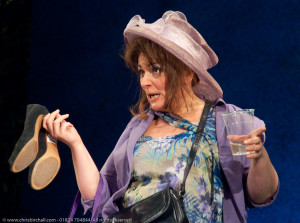 If I was pressed to nominate someone for a personal “Oscar” however, it would have to be the very talented Lynn Frances and the award would best for the “Best Drunk”.  I’ve seen many actors play drunk, and one of the best has always been Alan Stocks in his many appearances as Father O’Flaherty.  Alan… I’m afraid it is time to hand over the drunken crown.  Lynn’s portrayal as the tanked up Linda was the funniest and most convincing I have ever seen on any stage – or screen for that matter.  Sheer brilliance!