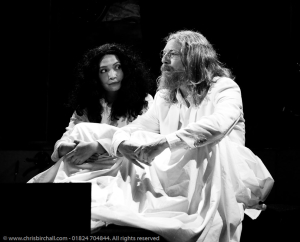 Along with an awful lot of other people, you’d be excused for thinking that you know the story of John Lennon.

It goes something like:  He was given up by his mother as a baby and brought up by an aunty; he went to Quarrybank School and formed a skiffle group called the Quarrymen; then he formed the Beatles; then he left the Beatles; then he spent a weekend in bed; spent months in a white suit giving peace a chance and then… he got shot.

That may well be it in a nutshell but there is a lot more besides.  I was a teenager in the sixties. I grew up with John Lennon’s music, from the early days, through all the evolving phases of the Beatles, to when he played Mind Games with us all as a solo artist.  I was a follower, a devotee. Since joining my first band in the sixties I’ve sung his songs.  I’ve got books and biographies.  I thought I knew it all. 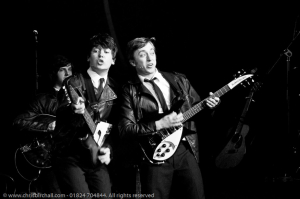 Yet I’ve seen this play three times in the last four years and each time I learn something new.

Writer and director Bob Eaton has masterfully condensed the life of  John Lennon into a play lasting less than three hours. Yet between the first leg breaking from the wings, to the final curtain, he tells the story more fully and concisely than all the books put together.

Each and every number becomes the narrative.  Realising how much of Lennon’s music was autobiographical, Bob Eaton chose the songs carefully and as each episode unfolds the lyrics that we thought we knew, release hidden meanings into our subconscious, building  a much bigger picture than could be achieved through dialogue alone. 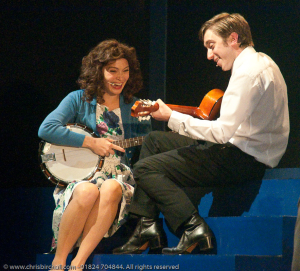 “Mother, you had me but I never had you” poignantly reveals the hurt he felt over his abandonment. And after his character says the words “The Beatles are finished. I want a divorce”, the song “How do you sleep at night” leaves no doubt in your mind who he blamed and sums up the bitterness and resentment he felt for Paul.

Because they are songs we know and love but perhaps never analyzed, the whole play becomes multi dimensional.  At one point for instance:  A phone rings and someone simply says “Brian’s dead”. The way this was followed by an adaptation of “A Day in the Life”  performed in a counterpoint with “Help” was simply beautiful!

The cast were nothing short of magnificent.  The Royal Court were lucky enough to secure the services of almost all the key actors who made the 2013 performance so successful.  This year they have built upon that success.

John Power is as good a Lennon as you would ever want and was sporting his own hair and a home-grown beard this year specially for the part.  Also back was Mark Newnham as the younger Lennon. He may not have looked too much like the real thing but he certainly perfected John’s mannerisms and persona. And it’s fair to say he delivered the early Beatles numbers with a fair degree of authenticity. 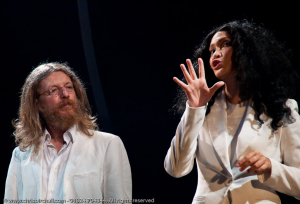 The beautiful Kirsten Foster was back again as a perfectly believable Yoko Ono.  Tom Connor looked and sounded even more like Paul McCartney this year, right down to the puppy dog eyes and the jaunty shake of the head as he sang.

Ross Higginson returned as the mop-haired Ringo.  Adam Keast and Jonathan Markwood were back too and played, amongst others, Brian Epstein, Stuart Sutcliffe, George Marting and Ed Sullivan. Nicky Swift played no fewer than six parts including that of Cynthia Lennon.  The only new cast member was Daniel McIntyre who played this year’s George .

A show like this is all about the music and I must say you couldn’t fault it. Performed live on stage, in front of your very eyes and ears by an extremely talented bunch of actors and actresses, the music captured the very essence of the Beatles/Lennon years.

Press night audiences are renowned for being the most critical but the show got a standing ovation and gets an unreserved 5/5 from me!

Lennon runs until July 19th at Liverpool’s  Royal Court Theatre.  If you don’t got and see this fantastic play, you can’t call yourself a fan of the Beatles music!

Clink on an image to enlarge