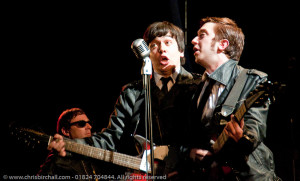 As Liverpool Festival’s Beatles week draws to a close, fans of the Fab Four have another treat in store as Lennon opens at the Royal Court Theatre for a month long run.

Written and directed by Bob Eaton, Lennon charts the life of the group’s most cantankerous member from birth right through to that fateful day in New York when an assassin’s bullet ended the life of arguably the most prolific and talented songwriter of the last century.

The most difficult task in putting together a show such as this was undoubtedly choosing which songs to choose for a production lasting two hours. You would have needed more like two days to include every song that featured John Lennon in the vast back catalogue from both the Beatles and his solo career. 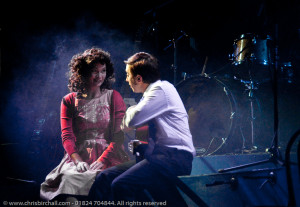 It was a job well done, because as tempting as it must have been to include some of the more popular numbers, they chose songs that defined each and every episode of his colourful life. Songs that had been written from the heart and about the highs and lows in the life of this working class hero.

There were the obvious ones of course:  Julia, which told of the rekindling of his relationship with his estranged mother. You’ve got to hide your love away, which told of the conspiracy of secrecy surrounding Cynthia’s pregnancy and their subsequent marriage. Watching the Wheels go Round, that told of the peace he found whilst away from the limelight after settling in America. 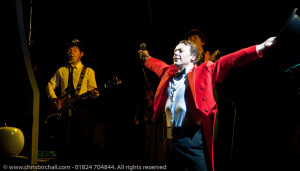 In fact every single one of the numbers virtually becomes the narrative, and throughout the show more words are sung than spoken.  What struck me was the way many of the songs that I have known so well since the sixties, only revealed their true and deeper meaning within this story-telling context.

It has to be said too, that the musicianship was superb and all credit must go to musical director Howard Gray who’s almost obsessive attention to detail kept the whole sound totally authentic. 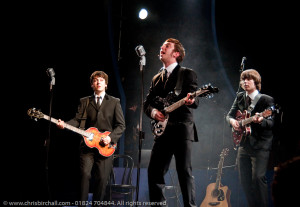 In fact when you think about it, what a casting nightmare!  Having successfully staged the show three years ago, the most natural thing in the world would have been to bring back the same cast.   And I am sure if they could, they would have.  In the event, only two of the original cast from the 2010 production were available, so they had to find two new Lennons as well as a Paul, George and Ringo.

There was also the added pressure of staging this play in front of a home town audience, many of whom know and love the songs backwards!

They needn’t have fretted.  Mark Newnham, whilst not bearing a striking resemblance to the young John Lennon, did manage to adopt much of his persona.  And it’s fair to say he delivered the early Beatles area numbers with a high degree of authenticity.  He strained a bit occasionally in the higher register – but then again, if you think about it, so did the real John Lennon! 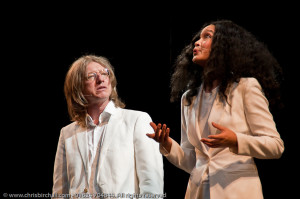 For the older John, The Royal Court production team struck gold in the form of John Power.  Born in the Allerton district of Liverpool during the Beatles heyday, John’s musical career includes stints as bass guitarist with the La’s and later as front man for the band Cast.  He even went to the same schools that John Lennon had attended  a couple of decades earlier.  It is probably true to say that he knew the character inside out.  What is undeniable is that he performed both the role and the music to perfection.

Matt Breen landed his role because he was a very competent guitarist who had a reasonable passing resemblance to George Harrison.  Matt is a musician who had never acted before but has now discovered his hidden talents in this department much to the delight of the production team.  Ross Higginson played both the mop-haired Ringo and the band’s former drummer Tommy Moore. 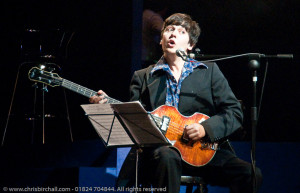 During the auditions, it was Tom Connor who turned up hoping for the part of Ringo, only to be told “Haven’t you looked in the mirror recently?  You’re gonna be McCartney”!  Tom then proceeded to spend much of his rehearsal time in front of said mirror perfecting the puppy-dog eyes and head shaking mannerisms that completed the illusion perfectly.

In a show like this, the music is paramount. And as I mentioned earlier, it was absolutely fabulous, capturing the real essence of the Beatles/Lennon years.  A lesser production team might have opted for miming or at least having the cast singing along either to backing tracks or a professional orchestra in the pit.  Not the Royal Court. Chief Executive Kevin Fearon’s passion of this lovely theatre would never allow that.  The music was performed live on stage, in front of your very eyes and ears by an extremely talented bunch of actors and actresses.

The only bit of miming in the whole show was when Tom Connor was armed with the left-handed bass.  Tom is an excellent guitarist but right handed. So they had another actor in the wings actually playing the bass line.  I didn’t discover this until after the show however.

To sum up, if you like the Mersey sound and reminisce about that magical bygone era, or indeed whatever your taste in music, this is a fabulous show.  And if you are a fan of the Beatles and John Lennon, it would be a crime not to go to see this show.