Let It Be comes to The Royal Court

I write this as someone who contributed in my own small way to The Mersey Sound back in the sixties. With my band, I trod many of the same boards as the “Fab Four”, including the original Cavern, The Iron Door and The Tower Ballroom, although sadly we were never on the same bill.

So yes: “Been there. Done that. Worn the tee-shirt”.

I still do actually, and in fact was sporting my latest one at The Royal Court for yesterday’s press night with my complimentary “Let It Be” badge proudly pinned in place. Yes… I’m a Beatles fan! 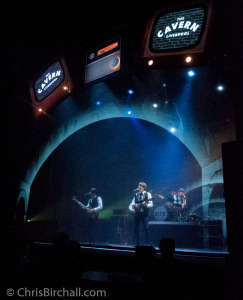 As a musician myself, I’ve always thought how boring it must be to play in a tribute band.  You see, a covers band that slots a few Beatles numbers into its repertoire, will be well received by the majority of fans even if they don’t sound like the original.

A covers band can put a new twist on an old song, do their own interpretation, inject their own pizzazz – and that approach is to be applauded. Tribute acts, on the other hand, particularly those who strive to look and act like the originals, are by definition charged with the task of authenticity. They need to sound absolutely like the original too. 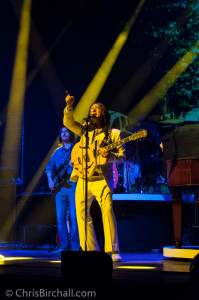 I’ve been to many shows featuring Beatles tribute bands over the years and because I’ve been a fan since those early days, and because their music dominates my record collection, you can imagine I always go along with a critical ear, whether it’s a Thursday night at The Cavern or a full blown theatre production.

Liverpool has spawned the best of such bands, one of the most successful being The Bootleg Beatles, who have performed more than 4000 gigs over the last 35 years. Then there are the BackBeat Beatles, often billed as “As near as you’ll get to the real thing”. We saw these guys at The Philharmonic back in 2010. It was quite literally, a note-for-note performance of the Sgt Peppers album from start to finish and they did look and sound like the Beatles. Right down to the rolling crescendo in A Day in the Life. At that show I could have easily believed the past 50 years had been a dream and that I was back in 1967 watching the real thing. Sadly this authenticity was lacking in last night’s performance. 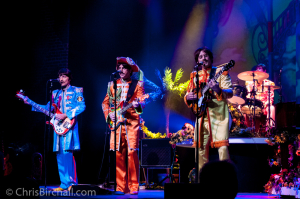 Let it Be – The Review

Don’t get me wrong the music last night was good and it was a lively show that had a fair number of the audience tapping, clapping and singing along to the forty familiar favourites. But it was good in a “covers band” sort of way.  There were some pretty obvious sound engineering issues which hopefully will get ironed out during the rest of the run.  And the musical direction also left something to be desired. The aforementioned rolling crescendo during A Day in the Life for instance, was pretty pathetic.  Generally the overall sound was too bassy and despite the presence of the Vox amplifiers on the stage and (for the most time) the correct guitar marques being used for the right songs, it somehow fell short of that authentic Beatles sound. 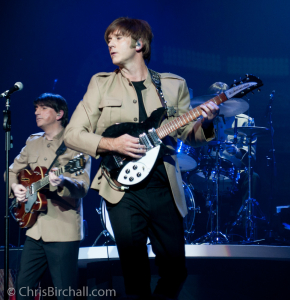 Neither were the lighting and effects up to the standard we have become used to at The Royal Court. When Lucy was In The Sky With Diamonds, the entire band completely disappeared at the hand of an over zealous smoke machine operator – and so did the first couple of rows of the audience!

All this is such a shame, because when the Royal Court put on a home-grown show (this one’s a “West End” touring show) they tend to get it right. Hopefully these are teething troubles or press night gremlins that won’t blight the rest of the run.

During the first half of the show, the band managed to get at least some of the audience on their feet for a few of the songs.  The second half was decidedly better, with some belting vocal performances and accomplished nifty guitar work. When Come Together ran into Get Back ran into Revolution the musicianship was second to none and the audience when wild for it.

And when Paul Mannion (who played George) performed the solo in While My Guitar Gently Weeps it was every bit as good as the original played by Eric Clapton on The White Album. Mannion played it live and he played it brilliantly.

If I had to pick a song that sounded most like the original it would be Penny Lane possibly followed by Hey Jude in the encore set, which had the entire auditorium singing, clapping and “rattling their jewellery”. 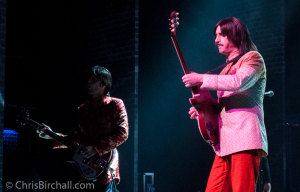 The banter between songs was less convincing. The only Liverpudlian on stage was Paul Mannion, who also played George Harrison at The Royal Court in Bob Eaton’s excellent 2010 production of Lennon.  Although Emanuele Angeletti’s vocals as McCartney were pretty good, he appeared to give up on the accent in between songs. Paul Canning too delivered some convincing Lennon vocals but failed with both the mannerisms and cheeky banter department.  And Luke Roberts managed to tone down his undoubted skills to recreate the steady unsophisticated beat that defines Ringo’s drumming.

So would I recommend you go and see Let It Be?

Hell yes!  But with a proviso: Go along to enjoy an evening of Beatles covers and you won’t be disappointed.  The show is an anthology billed as “A celebration of the music of the Beatles”.  As such it succeeds. So long as you remember that although there are costume changes to define each Beatles era, it is not a “musical play” in the same way that Lennon was at this same lovely theatre last year.