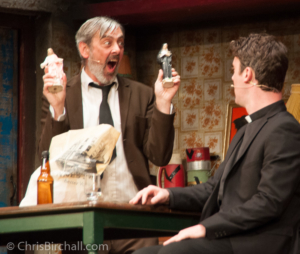 I must have seen Paul Duckworth a good half dozen or so times at The Royal Court in recent years. Yet I’ve just realised that I’d only ever seen a fraction of his zany and expressive humour.

To use the phraseology of Martin McDonagh’s dark Irish comedy, he was fecking brilliant!

He brought the character Valene Connor to life in a way lesser thespians might have been accused of over-acting. Yet here he was, a cross between the pythonesque Eric Idle and Marty Feldman without the squint, delivering his lines with impeccable timing, convincingly portraying the spoilt brat in a volatile and troubled brotherly relationship. 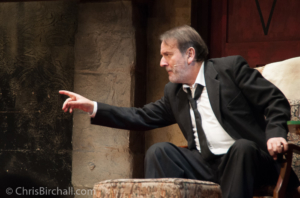 Coleman was the other half of this simmering sibling quagmire. Played by Keiran Cunningham, he was the quieter and less demonstrative of the two, whilst being equally as funny, and just as scary, as they squared up to each other in an intense fraternal power struggle.

Then there was the tragic Father Welsh. I kept seeing Stephen Tompkinson but I’ve been assured it was actor Alan Devally. His lugubrious lakeside monologue at the start of part two was extremely moving and quite magnificent. 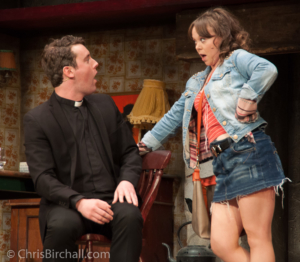 The sweet young actress Anne O’Riordan played the even younger and no less sweet Girleen Kelleher, who bounced around imparting little shafts of light into the dark story-line.

As dark as this play was, the dialogue was fast and funny, and all four actors played a blinder. The Irish humour was brilliant and the accents very convincing, which wouldn’t have been a problem for  O’Riordan and Devally, hailing as they do from Waterford and Galway respectively.

4.5 ✰
Lonesome West gets four and a half of my five stars. It is a different type of comedy compared to the Royal Court’s usual offerings, but no less enjoyable, and one not to be missed.

In fact the only thing I didn’t like about it was that damn silly title that gives the impression you’re off to see a wild west cowboy play.

Lost Soul at The Royal Court Liverpool Something About Simon