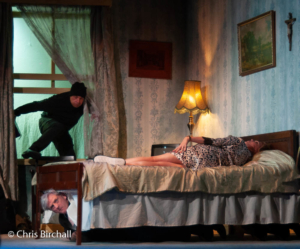 If you saw the original Dave Kirby comedy, Lost Soul, which last aired at The Royal Court in 2017, the characters will be familiar to you.

Although Lost Soul 2 is in effect a sequel, it is very much a stand-alone play that you can enjoy whether or not you have seen the original.

The story revolves around Smigger’s mid-life crisis.  He and Donna are not getting on, so he moves out and into his pal Terry’s spare room.  Terry’s wife doesn’t know and Smigger doesn’t want anybody to know.  Add into the mix a pregnant daughter and her hapless boyfriend and it all adds up to a play with many hilarious bedroom farce style comedy moments. 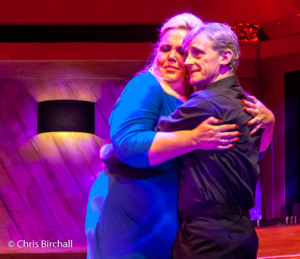 Smigger and Donner were played by the same actors (Andrew Schofield and Linzi Germain) as in the original, as are Terry and Pat (Jake Abrahams and Catherine Rice). Schofield’s mastery of comedic timing takes any play up to a whole new level, whilst seasoned members of the Royal Court clan, Germain and Abrahams know exactly what this theatre’s audiences love, and they give it in bucketloads.

Catherine made her debut here as the same character in 2017 and is well on her way to becoming a regular.

There are few who can play the dim-wit as well as actor Lenny Wood. His portrayal as the dopy barman was magnificent, reacting to everything said to him with the same vacant inane grin, until the penny eventually drops. During the break between acts one and two, they kept the curtain up on the bar scene, with Wood restocking the bar and wiping down the tables. Then one of those strokes of genius that make for an unexpected magical moment, director Bob Eaton had him come down into the auditorium to collect the empty glasses from the tables in the stalls. 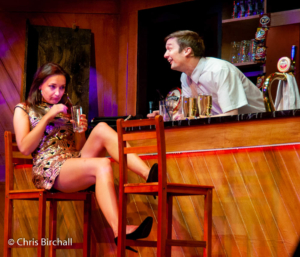 The two younger actors, Gemma Brodrick and Bobby Schofield, portrayed teenagers on the brink of parenthood, to perfection.

The show has more than it’s fair share of gags and one-liners, with lots of great seventies soul music, chosen to resonate sympathetically with the storyline.

Lost Soul 2 is a raucous comedy in time-honoured Royal Court traditions and as such will no doubt be a sell-out success.  It runs until the 6th of July. So if you want to see it, go get your tickets now.