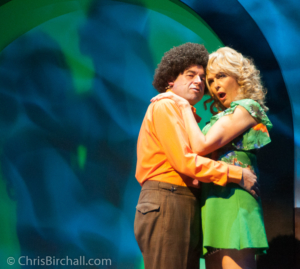 Hark back a while  to when Terry and Smigger copped off with sisters Pat and Donna, under the flashing disco lights in a city club, as they gyrated to the soul music of the seventies.

It was a time when the lads had curly perms and a droopy moustache, and the girls put their heart and soul into enjoying life.

Now fast forward to the present day. It’s the girls who are sporting the perms and fighting a losing battle against a furry top lip, whilst the lads are wandering around like lost souls. How have these relationships survived the test of time? Have they flourished or failed? 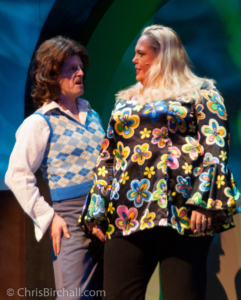 One thing is for sure… When Bob Eaton takes a Dave Kirby script and directs a cast of talented thespians which happens to include Royal Court regulars Lindzi Germain, Andrew Schofield, Lenny Wood and Jake Abraham, the story’s gonna be a good one for sure, and with a lorra laughs along the way.

The play cleverly flips back and forth between the two eras, keeping the stage hands extra busy with the complex scenery changes.

It is a play that makes the most of Schofield’s mastery of comedic timing and Lindzi Germain’s wonderful expressions as they deliver line after line of sardonic humour.

Nobody pays the dim-wit better than Lenny Wood whose vacant inane grin cracks me up every time.

And with his excellent portrayal of the down-trodden, cheated-upon Terry, Jake Abraham brought out the mothering instincts of every woman in the audience. 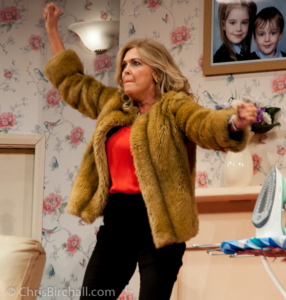 The bad guy was played by James Spofforth, and the young dolly-bird clubber by Paislie Reid, both making a return after some time away. It has to be said that along with Abraham and Wood, these two performed one of the cleverest ‘slow-motion’ fight scenes I’ve ever seen on stage.

In a departure from the usual format, there was no live music. In recent years, having the actors sing and play instruments, and even sometimes having the band on the stage instead of the orchestra pit, has  become something of a hallmark of Royal Court comedies. That’s not to say it was a disappointment. This play, after all, wasn’t written as a musical. 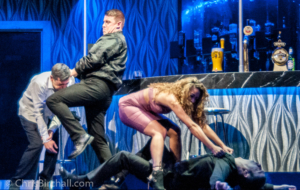 If you fancy watching a comedy with great gags, a decent story-line and loads of nostalgia, Lost Soul will fit the bill very nicely.

4/5 ★
It gets four stars from me, along with a recommendation to get along and see it between now and April 8th. And don’t forget – if you book in the stalls you can add a fine meal, served at your table prior to the show, for an extra tenner.

The Lighting was Hell, the band were Merry Lonesome West Review