Loving the Skin you’re in – the Merry Hell Spring Tour 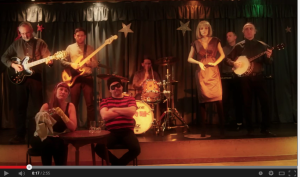 Fans of the Wigan folk rock band Merry Hell will be delighted to learn that they have lined-up a nine date Spring tour to coincide with the launch of their new single Loving the Skin you’re in.

The tour kicks off on April 18th at The Maze in Nottingham and takes in venues from North Wales to London.  Here in the North West, the choices are: The Honeysuckle in Wigan on May 4th, the Herman Chapel Arts Centre in Oswestry on May 3rd and a special appearance as their four-piece acoustic line-up at the Rhyl Folk and Acoustic Club on April 25th.

Full details of all the tour dates can be found on the Merry Hell website.

Loving the Skin you’re in is taken from the band’s new album Head Full of Magic, Shoes Full of Rain and for a limited time, you can watch their  new promotional video here (below).

Tickets are £11.00 and proceeds from the event will be donated to PAPYRUS (Prevention of Young Suicide). Doors: 7:30pm

Did you get my best side? An exceptionally high quality photograph from 1942