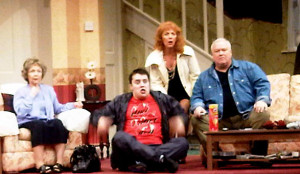 We all dream of winning the lottery.  Well now you can witness how one family lived the dream – and the nightmare – in the comedy Lucky Numbers at the Royal Court Theatre, Liverpool.

The storyline revolves around a selectively senile granny whose ticket comes up £8million and the way the rest of the family vie for her affections and try to persuade her not to leave the lot to  a donkey refuge.

Michael Starke (of Brookie, Corrie and The Royal fame) plays her work-shy son-in-law and Rachel Rae as her granddaughter gives a frighteningly accurate and hilarious portrayal of a stroppy teenager. 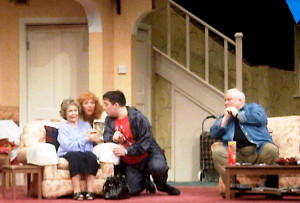 But the undoubted star of the show was  Sheila Reid who pulled off a complex and convincing performance throughout the play.  Remembering when she was supposed to be forgetful and not forgetting a single word of her lines, Sheila proved she has far more of her marbles intact than the ageing granny that was her character.

On the first night, you come to expect a few fluffed lines.  However, all seven members of the cast kept the banter, humour and slapstick flowing sweetly and hilariously as if they’d been doing this show for weeks.  Even during a scenery malfunction when a door knob fell off in his hand, Michael managed to work it into the script with a clever ad-lib, much to the appreciation of the attentive audience.

Lucky Numbers runs at the Royal Court until April 10th.  You really shouldn’t miss it.