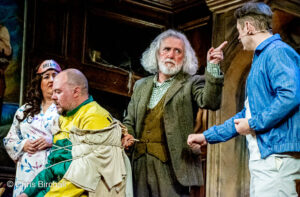 If you say it quick, and with a plum in your mouth, and maybe a “Dahrling” thrown in for good measure, people within earshot will be really impressed; they will think you are going to a production of Macbeth.

Far from being highbrow, however, Macca & Beth is more lowbrow but definitely high-comedy.

More than that, it is a down to earth, honest to goodness comedy in the boldest of Royal Court traditions but with a twist. For, although it slots nicely into the “scouse comedy” genre, it is their first play in a long time, that isn’t actually set in Liverpool. There are plenty of Merseyside references in the dialogue, though, and of course the inevitable scouse-flavoured one-liners. 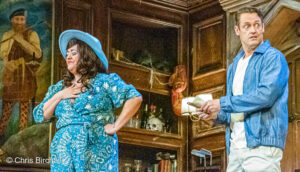 The two main characters, Macca and Beth, have been summoned to travel from Liverpool to the remote highlands of Scotland for the reading of an eccentric uncle’s will.

When they get there, all sorts of strange things happen, and as can be expected, much fun and hilarity ensues.

The pair are played by Danny O’Brien and Emma Bispham, the only two actors who are actually from Liverpool. Danny, of course, is no stranger to the Royal Court, and Beth has appeared in a couple of the theatre’s recent Christmas shows. 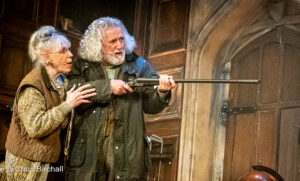 The play’s two dyed-in-the-wool Scots, Angus and Morag, are played by Gordon Kane and Andrea Miller, who were dragged by their kilts down the M6, and not just because of their convincing accents, for it has taken them no time at all to slot comfortably into that special style of slapstick that Royal Court audiences love. 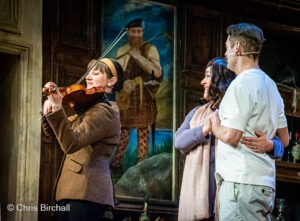 The third cast member from north of the border is young Karen Young, who moved south to train at the Liverpool Institute for the Performing Arts before sticking her foot firmly in the door by taking a job in the Box Office. Before long, a successful appearance in the tiny Royal Court Studio secured her the role on the main stage as the prim-and-proper, fiddle playing, Miss Glass.

Expect to be confused and amused by the role-swapping bewildered prison officer, Cropton, and escaped prisoner, Barry the Hatchet, played hilariously by Jerome Ngonadi and Jamie Smelt.

Writer Gerry Linford has, in his own words, “taken elements of Shakespeare and elements of vintage comedy like Bob Hope, the Marx Brothers and the Three Stooges, and tossed them into the melting pot”. The result is the type of escapist comedy for which the Royal Court is renowned. 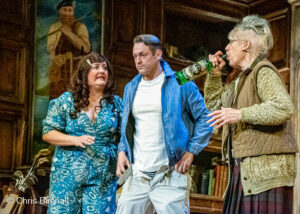 It has all the hallmarks of a trouser-dropping, door-spinning, bedroom farce, replete with wonderful one-liners and lots of slapstick. They even manage the odd nod to the bard with suitably modified Shakespearian quotes, my personal favourite being “Much ado about f__k all” (with the blanks filled in of course!).

Do get along to see this fabulous slice of scouse frivolity. It will more than compensate for the lack of laughs foisted upon us by the pandemic.

Macca & Beth runs until the 28th of May. Tickets from the Box Office