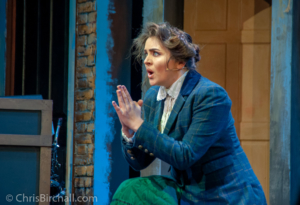 ♪♫♪ And she’ll never walk down Lime Street any more…♫♪♫

But she did. Right down Lime Street, around the corner, past what used to be the Penny Farthing and into the stage door of Liverpool’s Royal Court Theatre.

Although that iconic song does not actually feature in the play, Maggie May the Musical is very much about that very same forlorn Irish lass who found herself lost and destitute in Liverpool halfway through the twentieth century. 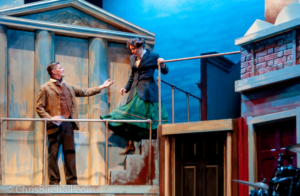 Her story has been brought to life through the script of visionary writer and director Bob Eaton, and is told via a whole raft of wonderful original songs composed by his partner Sayan Kent.

In what has become a tradition at this lovely art deco theatre, the orchestra forsakes the seclusion and comfort of ‘the pit’, taking to the stage itself, with every single member of the eleven-strong cast harmonising and playing their instruments as they act out the play through the medium of song. 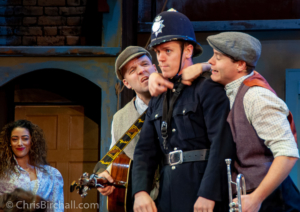 All credit to musical director Howard Gray and to the talented actors who performed seemingly effortlessly without the safety net of having a music score in front of them, whilst at the same time dancing and remembering their lines, positions and stage direction. They made an immensely difficult task look simple.

When the Royal Court was rebuilt in the 30s, it was given a revolving stage which eventually broke and was neglected for many years. Happily, this has now been restored and Maggie May is the first production to see this feature fully functional. The ability to segue from one scene to another without any apparent break in the action or the dialogue meant the play could proceed without any interruption to the boundless energy that emanated from that stage from curtain up to curtain call. 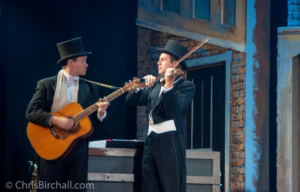 This brand new musical is as good as anything you might find in the ‘West End”, and the fact it is a story about Liverpool, performed in Liverpool, makes it that much more special. It has everything a musical should have and everything about it is wonderful. A bittersweet tale told with just the right amount of comedy. If it had been a challenge to musically interpret the highs and the lows, the joy and poignancy; then the writers, directors and the cast met the challenge and conquered it.

Maggie May the Musical gets a full five stars from me. It runs until November 10th. Don’t miss it.

Bouncing into the Present Day There’s Something About Simon