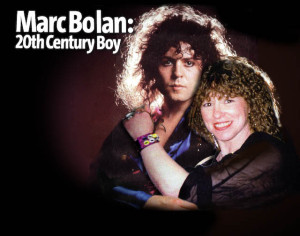 Looking back through the archives…

I found myself reflecting upon how we used to produce photographs back in the days T-Rex were banging out their hits. In 1977 it was all about groping around in the dark, breathing in noxious fumes, checking timings to the second and temperatures to the degree Fahrenheit.

Never mind T-Rex – since the advent of digital photography,the wet darkroom has become something of a dinosaur itself!

Back then, whilst montages were possible, they were a nightmare to do and consequently very expensive for the customer.

Back in 2008, some thirty years on from Marc Bolan’s untimely death, I received an interesting request from one of his staunchest fans. My customer, Pauline, brought in a magazine cutting featuring the 20th Century Boy and a photograph showing herself with Marc Bolan’s son Rolan (couldn’t they afford the “d”?). What she wanted me to do was create a picture showing her with the late T-Rex front man himself. 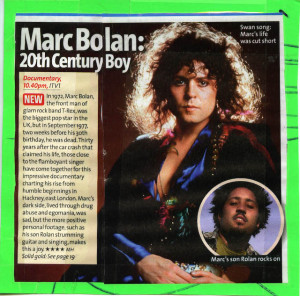 The cutting was covered in Sellotape and the photograph was a low resolution scan. It had been taken five years ago at a do in Golder’s Green to commemorate the 25th anniversary of the star’s demise, so the original was not available.

So… not very good quality material to work from – but it was doable.

First I scanned both images and did a bit of preliminary tidying up in Photoshop – removing the panel of text and adding a little more space to the right hand side. I sampled the lightest and darkest areas of the background and used the Gradient, Clone and Patch tools to fill the new areas before adding “noise” to create a texture similar to the original. 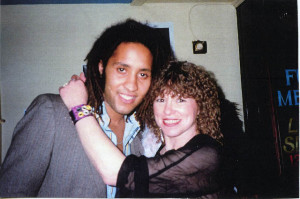 Next task was to cut out the lady from the photograph. For this I used the Extract tool, which leaves a nice soft edge, and was then able to drop the extracted image as a new layer on the Bolan picture. After resizing, it was obvious that the lady’s arm was in the wrong place, so I cut and copied the forearm onto a new layer enabling me to set it at a more realistic angle. Then I did the same with Marc Bolan’s arm so it looked as though his hand was holding Pauline’s arm.

Then I added a very soft drop shadow to the Pauline layer to make the montage more realistic and eliminate the “cardboard cut-out” effect.

The only thing remaining was to work on Pauline’s hair. The singer was powerfully back-lit, so pauline still didn’t look as though she was really there. So I selected a portion of the rim-lit hair onto a new layer and manipulated it into place using the Transform>Warp function. After blending it into the edge of Pauline’s hair, the job was done.

All that remained was to print half a dozen copies for one very happy fan.