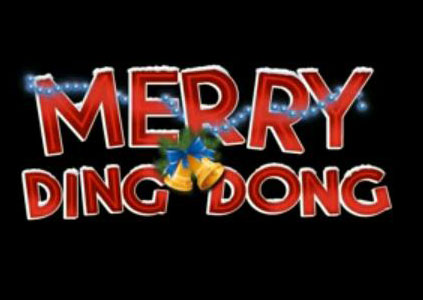 When you’ve had your fill of nativities and carol services, get yourself down to Liverpool’s Royal Court Theatre for the finest antidote known to man – Scouse Humour.

Are you beginning to get the picture?

And there is a touch of poetic irony in the fact that whilst the actors playing the feuding fathers are Merseyside football fans,  Evertonian Jake Abraham  has been cast as Noel the big Liverpool FC supporter, whilst Stephen Aintree who plays the ‘Red’ Chris has the exact opposite allegiance in real life!  On stage they were very convincing in their new colours and kept us in stitches thoughout.

The story revolves around life-long friends Chris and Noel who fell out during a holiday both families spent at Talacre in North Wales. The actual reason behind the falling out is not revealed until late on in the play.  I won’t spoil it for you, but if you are a football fan you will really appreciate the audience reaction when it happens!

I must say the entire cast displayed a remarkably proficient level of musical ability.  Royal Court regulars Eithne Brown and Lindzi Germain were spot on as usual, whilst Stephen Fletcher and Rachael Rae (who played the neighbouring teenage lovers) where quite outstanding at times.  Stephen turned out a remarkable Elvis impersonation with his comedic version of “Blue Blue Christmas” and the diminutive Rachel belted out a parody of Mariah Carey’s ‘All I Want For Christmas Is You’ that would have got her through to Simon Cowel’s final two with no problem at all.

This musical comedy is festively awash with dozens of Christmas songs, both traditional and modern.  Although I have to say any of the songwriters who have graves to turn in would be spinning like tops if they heard what has been done to their lyrics.  Very very funny.  And totally irreverent!

Speaking of reverence, the part of the vicar was played by Alan Stocks.  And he gave us one of the funniest, and at the same time most convincing, stage performances of a drunk that I have ever seen.

He too had a good singing voice.  It was one you would definitely describe as baritone bordering on soprano.   It was some surprise, therefore, when he appeared descending in a helicopter to the opening bars of  “Walking in the Air”.  The whole theatre erupted as he consumed the contents a helium balloon to perform the number, note perfect, as a tenor bordering on falsetto!

How the cast kept straight faces defeats me, for they obviously enjoyed performing as much as the audience enjoyed watching.  I wasn’t the only one in that packed Wednesday night house wiping tears of laughter off my cheeks.

A standing ovation brought these seven talented actors back out to perform one last hilarious number as a curtain call – and we were all on our feet joining in.

Merry Ding Dong runs until January 23rd.  We’re going to see it again – and you really shouldn’t miss it!