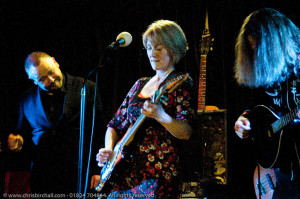 According to the saying… “In this world nothing can be said to be certain, except death and taxes”   Well let me add another to that maxim – “the certainty of a hellishly good night out when the sound of Merry Hell is ringing in your ears!”

Take three Wigan-born brothers name of Kettle, a guitar, a mandolin and a wife named Virginia;  season this recipe with the occasional bassist, keyboard player and drummer, stir and simmer in the cauldron that is the music business, and what do you get…?  The most delicious serving of folk rock, that’s what!

Although ostensibly a seven piece band, Merry Hell have a trimmed down acoustic contingent that play the smaller “folk club” type of venue, comprising John, Andrew and Bob Kettle and John’s wife Virginia.  At Conwy Folk Club last night, they were joined by their bassist Andrew Dawson.

With an ever growing catalogue of their own material, they have a rocky style that is foot-tappingly uplifting with story-telling lyrics set to catchy melodies that get everybody singing along – even Merry Hell virgins!  Their collective song-writing is superb with evocative titles like “Criminals in Pin-stripped Suits”, “Drunken Seranade in the Rain” and “Blink… and you miss it”.  One of my personal favourites “The Butcher and the Vegan” was missing off last night’s set list, although this was more than compensated for by a sampling of some tracks off their forthcoming second album ‘Head Full of Magic, Shoes Full of Rain’

It is true to say that last night the band was on top form. The appreciative audience were baying for more and demanding to know when they would be returning to this little corner of Wales.

Having seen the four and five piece version on several occasions now, I can no longer claim to be a Merry Hell virgin but I can’t wait to catch the full ensemble. I shall be scouring the list of upcoming gigs on Merry Hell’s website and highly recommend you do the same. There are also links on their site for downloading sample tracks and for pre-ordering the new album.

Let’s not forget the support acts…

Opening for Merry Hell last night was the recently reformed local band Queen beats Jack who’s innovative style got the evening off to a fine start.  And there was a cameo solo appearance by Merry Hell’s Roadie Deggsie. (Click images to enlarge)

A Spring Day in Liverpool Down Our Street – Review