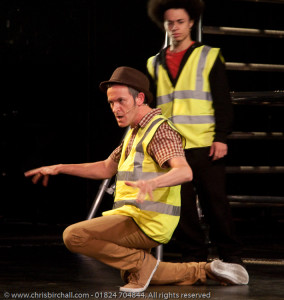 When the Royal Court stages Shakespeare’s best loved comedy you just know you are going to be in for a treat!

Midsummer Night’s Dream was indeed such a treat.

By closely following the original story and keeping the rich and colourful Shakespearian dialogue, the play would please all but the most die-hard purists.  And by having Liverpool actors deliver that dialogue with an equally colourful scouse accent and a smattering of quolocial ad-libs, this play can also be appreciated and enjoyed by the down-to-earth rank-and-file Royal Court theatre-goers.

Setting the productiom in modern day Liverpool with contemporary  dress also helped make this play accessible to those who might normally side-step a play by The Bard. 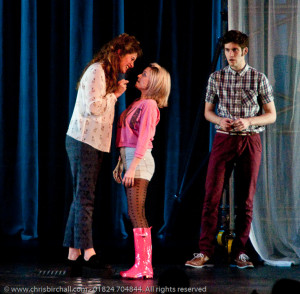 Hermia in pink boots and hot-pants, played by the delightful Jamie Hampson.   Bottom in a Hi-Vis “Community Payback” vest, played by the inimitable Jack Lord.   Titania in a fetching evening dress that was, frankly,  so low-cut it needed …ahem …titania-tape to prevent the beautiful Zoe Lister from escaping it’s folds!

All this conspired to create an entertaining blend of traditional and modern that was exceptionally well handed by director Max Rubin and the cast as a whole.  In fact, as someone who often can’t even remember what I had for breakfast, I must say the entire cast have my utmost respect for being able to remember their complicated lines- particularly when you consider the same actors are also staging Macbeth here on alternate nights! 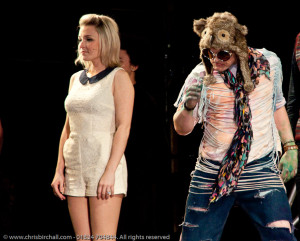 There were many enjoyable moments – especially from the omni-present Puck, ladishly played by Shaun Mason;  the fight between love rivals Helena (Harriet Barrow) and the pink-booted Hermia.

It must be said, that for me, Jack Lord’s hilarious portrayal of Bottom transforming into an ass was surpassed only by his outlandish performance in the raucous “play within the play” at the end.

Even if you’ve never before considered going to watch Shakespeare, you really should see this version of Midsummer Night’s Dream.  Put aside any distant memories of the boring bits you learned at school.  This is a really good enjoyable comedy with the added bonus of the poetic prose from the greatest wordsmith of all time.

Catfish Therapy at the Floral Pavilion Three in a Bed